Some Personal Recollections of Dr. Janeway 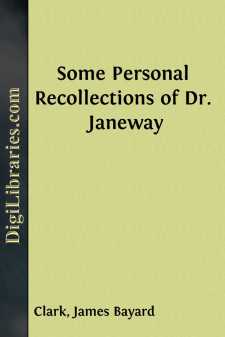 What it is that has kept urging me to write down these recollections of Edward Gamaliel Janeway, the physician, would indeed be rather hard to define, but the desire to record a little something of what I had personally come to know of this unusual man made itself felt very shortly after his death, now over five years ago. Since that time this feeling—steadily growing—seems irresistibly to have drawn me on to this endeavour to add some little part to the perpetuation of his memory—this man, who without pretence held the reputation of—one stops to take a breath before writing it—the reputation of being the best diagnostician in the world.

If by some happy chance these pen-pictured glimpses should bear some likeness to the man—if they should bring out here and there a line or colour which will recall some characteristic, show some quality, reveal some trait which, for those who knew him, will help to keep his memory fresh, they will have earned for themselves a very good reward. But beyond this, if they should fall to the notice of a younger generation and, more especially, to those choosing the profession of the physician, and the reader can discern therein something of the man himself, can get some glimpse of his life and its meaning, can gain some sense of the sincerity, the simplicity, the self-sacrifice and singleness of purpose which guided him and finally lifted him so far out of and above the ordinary, then will the pleasant task of recalling fully justify this venturesome effort.

It was in the midst of my medical schooldays and in the unrestraint of Adirondack holidays twenty years ago that I first met Dr. Janeway. As I look back at this first memory I can see a vigorous, well-built man a little way on in the fifties, dressed for a mountain climb or a game of golf. His fine, firm-featured face would have struck one as rather stern if one happened to miss that blessed kindliness which always lighted his steady eyes. Though dressed for outing, it was not difficult to see by a brief study of his face that his choice of exercise was intellectual rather than physical, yet he went to his game or his walk with the same directness of purpose with which he went to his work.

Ordinary social intercourse was an effort for him. It seemed as if he had to focus his mind down to the mental horizon of the everyday world of everyday people around him, yet he did not appear impatient of the small talk going on about him so long as it was plain he was not to take part in it himself.

One characteristic which never failed to impress those who met him was his reserve. It was the quality of it which was so striking. It was not a reserve which was raised of aloofness; there was no particle of that, no self-esteem, no egoism—common builders of reserve—yet on the other hand it was not the retreat of shyness as many might have thought, though out of it a certain constraint was undoubtedly born. One might almost say it was a result rather than a reserve; the result of a something hard at work within; a preoccupying something; a gestating something, the offspring of which was—well—what he was.

Another quality which leaves itself deep carved in the memory of these early days of acquaintance was the quiet, unconscious respect he seemed, with equal unconsciousness, to inspire in all about him; and more, even in those who in kinship and friendship were closest to him, and with a constancy which never wavered. In those days only the more evident traits of his character came home to me. It was rather by feeling, by intuition, that he impressed me. I had no measure of my own with which to estimate his mental attainments....