Some Old Time Beauties After Portraits by the English Masters, with Embellishment and Comment 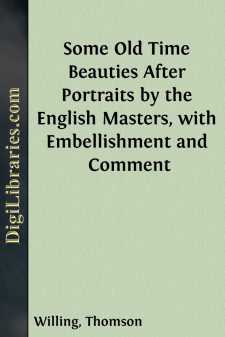 The Dashing Duchess,—the impulsive, ebullient beauty whose smile swayed ministers, and for whose favor princes were beggars! A loveliness of manner, as of feature, such seductive color,—glowing carnations,—and such golden-brown hair, with a fine figure, made up an opulent personality, than which no more consummate type of beauty has been preserved to us by painter or poet.

Georgiana Spencer was the daughter of Lord Spencer, afterwards first Earl Spencer; but her impulsiveness, her waywardness, and improvidence were a legacy from her grandfather, "Jack" Spencer, the grandson and special favorite of the beautiful Sarah, Duchess of Marlborough. Her "Torismond," she called him. His was a career of profligacy, a course of error and extravagance. His mother was Lady Sunderland, known in society as "the little Whig," from her small stature and her persistent politics. Her party badge was always worn,—the black patch on the left side of the face, as distinguished from the Tory fashion of wearing it on the right side. So Georgiana came legitimately by her beauty, her Whiggish politics, and her versatile vivacity of manner, as well as her improvidence and indiscretion.

But her mother's strong character was a potent influence. She was the daughter of the Right Honorable Stephen Poyntz, and was of high repute for generosity, for sensibility, for charity, and for courteous dignity of demeanor. We hear of Georgiana being a beautiful child; and Reynolds as well as Gainsborough, both made painted record of that childish beauty. Her brightness of mind gave her an interest in art, in music, and in literature; and, though not proficient in the practice of either, she had more than the society woman's knowledge of them. At seventeen, she married William, fifth Duke of Devonshire, ten years her senior. His was a temperament antipathetic to hers,—unsympathetic, unimpressionable, and taciturn, yet withal of the Cavendish characteristic persistency of purpose and honest intent.

The Duchess at once became a queen of society in the Carlton House Court. Devonshire House was an assembly place for the Whigs; and its lovely mistress was the hostess of many a statesman exalted by his wit, as of many a politician with following by virtue of his station. Like all radical companies, it was a motley mixture that found welcome there. The Prince of Wales was a devotee. The then shining Sheridan was a frequenter; but with the name of Fox has that of the Duchess been more associated than of aught other. Her supremacy among these companions was not in the manner of the French Salon leaders,—while wit, knowledge, and tact were hers, she lived not by learning, but by her liveliness and jollity. She was not the scholar in politics, but the politician among scholars out of school.

It was a roystering, revelling company; and political as well as personal penury became the portion of many as the result of these improvident and profligate days. The episode of the Duchess's career which is most known, is her purchase, by a kiss, of a vote for Fox when she was championing his cause in an election, and canvassing for votes in company with her sister, Lady Duncannon. It was said, "never before had two such lovely portraits appeared on a canvass." A butcher bargained for his vote by asking a kiss from the lovely lips of the seductive Duchess. The price was paid, amid the plaudits of the crowd....