Some Imagist Poets An Anthology 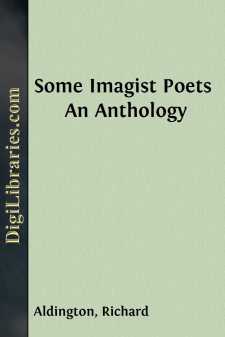 In March, 1914, a volume appeared entitled "Des Imagistes." It was a collection of the work of various young poets, presented together as a school. This school has been widely discussed by those interested in new movements in the arts, and has already become a household word. Differences of taste and judgment, however, have arisen among the contributors to that book; growing tendencies are forcing them along different paths. Those of us whose work appears in this volume have therefore decided to publish our collection under a new title, and we have been joined by two or three poets who did not contribute to the first volume, our wider scope making this possible.

In this new book we have followed a slightly different arrangement to that of the former Anthology. Instead of an arbitrary selection by an editor, each poet has been permitted to represent himself by the work he considers his best, the only stipulation being that it should not yet have appeared in book form. A sort of informal committee—consisting of more than half the authors here represented—have arranged the book and decided what should be printed and what omitted, but, as a general rule, the poets have been allowed absolute freedom in this direction, limitations of space only being imposed upon them. Also, to avoid any appearance of precedence, they have been put in alphabetical order.

As it has been suggested that much of the misunderstanding of the former volume was due to the fact that we did not explain ourselves in a preface, we have thought it wise to tell the public what our aims are, and why we are banded together between one set of covers.

The poets in this volume do not represent a clique. Several of them are personally unknown to the others, but they are united by certain common principles, arrived at independently. These principles are not new; they have fallen into desuetude. They are the essentials of all great poetry, indeed of all great literature, and they are simply these:—

1. To use the language of common speech, but to employ always the exact word, not the nearly-exact, nor the merely decorative word.

2. To create new rhythms—as the expression of new moods—and not to copy old rhythms, which merely echo old moods. We do not insist upon "free-verse" as the only method of writing poetry. We fight for it as for a principle of liberty. We believe that the individuality of a poet may often be better expressed in free-verse than in conventional forms. In poetry, a new cadence means a new idea.

3. To allow absolute freedom in the choice of subject. It is not good art to write badly about aeroplanes and automobiles; nor is it necessarily bad art to write well about the past. We believe passionately in the artistic value of modern life, but we wish to point out that there is nothing so uninspiring nor so old-fashioned as an aeroplane of the year 1911.

4. To present an image (hence the name: "Imagist"). We are not a school of painters, but we believe that poetry should render particulars exactly and not deal in vague generalities, however magnificent and sonorous....