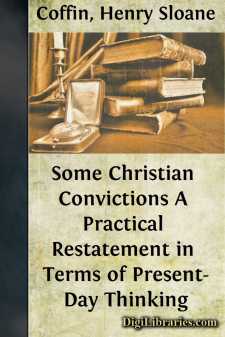 When King Solomon's Temple was a-building, we are told that the stone was made ready at the quarry, "and there was neither hammer nor axe nor any tool of iron heard in the house." The structures of intellectual beliefs which Christians have reared in the various centuries to house their religious faith have been built, for the most part, out of materials they found already prepared by other movements of the human mind. It has been so in our own day, and a brief glance at some of the quarries and the blocks they have yielded may help us to understand the construction of the forms of Christian convictions as they appear in many minds. Some of the quarries named have been worked for more than a century; but they were rich to begin with, and they have not yet been exhausted. Some will not seem distinctive veins of rock, but new openings into the old bed. Many blocks in their present form cannot be certainly assigned to a specific quarry; they no longer bear an identifying mark. Nor can we hope to mention more than a very few of the principal sources whence the materials have been taken. The plan of the temple and the arrangement of the stones are the work of the Spirit of the Christian Faith, which always erects a dwelling of its own out of the thought of each age.

Romanticism has been one rich source of material. This literary movement that swept over Germany, Britain, France and Scandinavia at the opening of the Nineteenth Century, itself influenced to some degree by the religious revival of the German Pietists and the English Evangelicals, was a release of the emotions, and gave a completer expression to all the elements in human nature. It brought a new feeling towards nature as alive with a spiritual Presence—

Something far more deeply interfused  Whose dwelling is the light of setting suns,  And the round ocean, and the living air,  And the blue sky, and in the mind of man:  A motion and a spirit, that impels  All thinking things, all objects of all thought,  And rolls through all things.

It baptized men into a new sense of wonder; everything became for them miraculous, instinct with God. It quickened the imagination, and sent writers, like Sir Walter Scott, to make the past live again on the pages of historical novels. Sights and sounds became symbols of an inner Reality: nature was to Emerson "an everlasting hint"; and to Carlyle, who never tires of repeating that "the Highest cannot be spoken in words," all visible things were emblems, the universe and man symbols of the ineffable God.

To the output of this quarry we may attribute the following elements in the structure of our present Christian thought:

(1) That religion is something more and deeper than belief and conduct, that it is an experience of man's whole nature, and consists largely in feelings and intuitions which we can but imperfectly rationalize and express. George Eliot's Adam Bede is a typical instance of this movement, when he says: "I look at it as if the doctrines was like finding names for your feelings."

(2) That God is immanent in His world, so that He works as truly "from within" as "from above." He is not external to nature and man, but penetrates and inspires them....