by Charles A. (Charles Abram) Ellwood 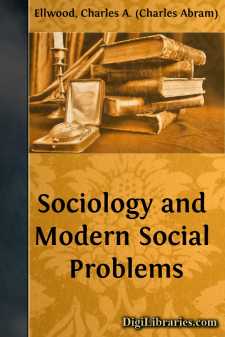 CHAPTER I THE STUDY OF SOCIETY

What is Society?—Perhaps the great question which sociology seeks to answer is this question which we have put at the beginning. Just as biology seeks to answer the question "What is life?"; zoölogy, "What is an animal?"; botany, "What is a plant?"; so sociology seeks to answer the question "What is society?" or perhaps better, "What is association?" Just as biology, zoölogy, and botany cannot answer their questions until those sciences have reached their full and complete development, so also sociology cannot answer the question "What is society?" until it reaches its final development. Nevertheless, some conception or definition of society is necessary for the beginner, for in the scientific discussion of social problems we must know first of all what we are talking about. We must understand in a general way what society is, what sociology is, what the relations are between sociology and other sciences, before we can study the social problems of to-day from a sociological point of view.

The word "society" is used scientifically to designate the reciprocal relations between individuals. More exactly, and using the term in a concrete sense, a society is any group of individuals who have more or less conscious relations to each other. We say conscious relations because it is not necessary that these relations be specialized into industrial, political, or ecclesiastical relations. Society is constituted by the mental interaction of individuals and exists wherever two or three individuals have reciprocal conscious relations to each other. Dependence upon a common economic environment, or the mere contiguity in space is not sufficient to constitute a society. It is the interdependence in function on the mental side, the contact and overlapping of our inner selves, which makes possible that form of collective life which we call society. Plants and lowly types of organisms do not constitute true societies, unless it can be shown that they have some degree of mentality. On the other hand, there is no reason for withholding the term "society" from many animal groups. These animal societies, however, are very different in many respects from human society, and are of interest to us only as certain of their forms throw light upon human society.

We may dismiss with a word certain faulty conceptions of society. In some of the older sociological writings the word society is often used as nearly synonymous with the word nation. Now, a nation is a body of people politically organized into an independent government, and it is manifest that it is only one of many forms of human society. Another conception of society, which some have advocated, is that it is synonymous with the cultural group. That is, a society is any group of people that have a common civilization, or that are bearers of a certain type of culture. In this case Christendom, for example, would constitute a single society. Cultural groups no doubt are, again, one of the forms of human society, but only one among many....