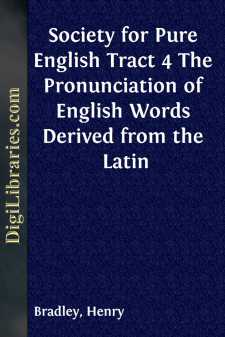 ON THE PRONUNCIATION OF ENGLISH WORDS DERIVED FROM LATIN

[This paper may perhaps need a few words of introduction concerning the history of the pronunciation of Latin in England.

The Latin taught by Pope Gregory's missionaries to their English converts at the beginning of the seventh century was a living language. Its pronunciation, in the mouths of educated people when they spoke carefully, was still practically what it had been in the first century, with the following important exceptions. 1. The consonantal u was sounded like the v of modern English, 2. The c before front vowels (e, i, o, æ, œ), and the combinations tГ„­, cГ„­ before vowels, were pronounced ts. 3. The g before front vowels had a sound closely resembling that of the Latin consonantal i. 4. The s between vowels was pronounced like our s. 5. The combinations æ, œ were no longer pronounced as diphthongs, but like the simple e. 6. The ancient vowel-quantities were preserved only in the penultima of polysyllables (where they determined the stress); in all other positions the original system of quantities had given place to a new system based mainly on rhythm. Of this system in detail we have little certain knowledge; but one of its features was that the vowel which ended the first syllable of a disyllabic was always long: pГ„ВЃter, pГ„ВЃtrem, DГ„вЂњus, pГ„В«us, Г„В«ter, Г…ВЌvis, hГ…В«mus.

Even so early as the beginning of the fifth century, St. Augustine tells us that the vowel-quantities, which it was necessary to learn in order to write verse correctly, were not observed in speech. The Latin-speaking schoolboy had to learn them in much the same fashion as did the English schoolboy of the nineteenth century.

It is interesting to observe that, while the English scholars of the tenth century pronounced their Latin in the manner which their ancestors had learned from the continental missionaries, the tradition of the ancient vowel-quantities still survived (to some extent at least) among their British neighbours, whose knowledge of Latin was an inheritance from the days of Roman rule. On this point the following passage from the preface to Ælfric's Latin Grammar (written for English schoolboys about A.D. 1000) is instructive:—

The British contagion of which Ælfric here complains had no permanent effect. For after the Norman Conquest English boys learned their Latin from teachers whose ordinary language was French. For a time, they were not usually taught to write or read English, but only French and Latin; so that the Englishmen who attempted to write their native language did so in a phonetic orthography on a French basis. The higher classes in England, all through the thirteenth century, had two native languages, English and French....