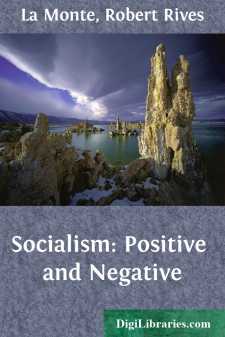 Until the middle of this (the nineteenth) century the favorite theory with those who attempted to explain the phenomena of History was the Great-Man-Theory. This theory was that once in a while through infinite mercy a great man was sent to the earth who yanked humanity up a notch or two higher, and then we went along in a humdrum way on that level, or even sank back till another great man was vouchsafed to us. Possibly the finest flower of this school of thought is Carlyle's Heroes and Hero Worship. Unscientific as this theory was, it had its beneficent effects, for those heroes or great men served as ideals, and the human mind requires an unattainable ideal. No man can be or do the best he is capable of unless he is ever reaching out toward an ideal that lies beyond his grasp. Tennyson put this truth in the mouth of the ancient sage who tells the youthful and ambitious Gareth who is eager to enter into the service of King Arthur of the Table Round:

"——————the King Will bind thee by such vows as is a shame A man should not be bound by, yet the which No man can keep."

This function of furnishing an ideal was performed in former times by these great men and more especially by those great men whom legend, myth and superstition converted into gods. But with the decay of the old faiths the only possible fruitful ideal left is the ideal upheld by Socialism, the ideal of the Co-operative Commonwealth in which the economic conditions will give birth to the highest, purest, most altruistic ethics the world has yet seen. It is true the co-operative commonwealth is far more than a Utopian ideal, it is a scientific prediction, but at this point I wish to emphasize its function as an ideal.

But it is obvious that this Great Man theory gave no scientific clue to history. If the Great Man was a supernatural phenomenon, a gift from Olympus, then of course History had no scientific basis, but was dependent upon the arbitrary caprices of the Gods, and Homer's Iliad was a specimen of accurate descriptive sociology. If on the other hand the great man was a natural phenomenon, the theory stopped short half way toward its goal, for it gave us no explanation of the genesis of the Great Man nor of the reasons for the superhuman influence that it attributed to him.

Mallock, one of the most servile literary apologists of capitalism, has recently in a book called "Aristocracy and Evolution" attempted to revive and revise this theory and give it a scientific form. He still attributes all progress to Great Men, but with the brutal frankness of modern bourgeois Capitalism, gives us a new definition of Great Men. According to Mallock, the great man is the man who makes money. This has long been the working theory of bourgeois society, but Mallock is the first of them who has had the cynicism or the stupidity to confess it. But mark you, by this confession he admits the truth of the fundamental premise of modern scientific socialism, our Socialism, viz., that the economic factor is the dominant or determining factor in the life of society. Thus you see the ablest champion of bourgeois capitalism, admits, albeit unconsciously, the truth of the Marxian materialistic conception of history. This book, however, is chiefly remarkable for its impudent and shameless misrepresentations of Marx and Marxism, but these very lies show that intelligent apologists of capitalism know that their only dangerous foe is Marxian socialism.

But just as according to the vulgar superstition the tail of a snake that has been killed wiggles till sundown, so this book of Mallock's is merely a false show of life made by a theory that received its deathblow long since. It is the wiggling of the tail of the snake that Herbert Spencer killed thirty years ago with his little book "The Study of Sociology." The environment philosophy in one form or another has come to occupy the entire field of human thought. We now look for the explanation of every phenomenon in the conditions that surrounded its birth and development....