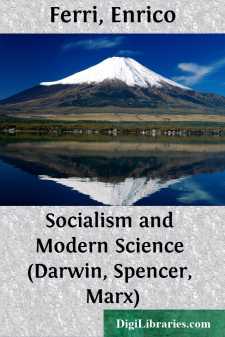 I. VIRCHOW AND HAECKEL AT THE CONGRESS OF MUNICH.

On the 18th of September, 1877, Ernest Haeckel, the celebrated embryologist of Jena, delivered at the Congress of Naturalists, which was held at Munich, an eloquent address defending and propagating Darwinism, which was at that time the object of the most bitter polemical attacks.

A few days afterward, Virchow, the great pathologist,—an active member of the "progressive" parliamentary party, hating new theories in politics just as much as in science—violently assailed the Darwinian theory of organic evolution, and, moved by a very just presentiment, hurled against it this cry of alarm, this political anathema: "Darwinism leads directly to socialism."

The German Darwinians, and at their head Messrs. Oscar Schmidt and Haeckel, immediately protested; and, in order to avert the addition of strong political opposition to the religious, philosophical, and biological opposition already made to Darwinism, they maintained, on the contrary, that the Darwinian theory is in direct, open and absolute opposition to socialism.

"If the Socialists were prudent," wrote Oscar Schmidt in the "Ausland" of November 27, 1877, "they would do their utmost to kill, by silent neglect, the theory of descent, for that theory most emphatically proclaims that the socialist ideas are impracticable."

"As a matter of fact," said Haeckel, "there is no scientific doctrine which proclaims more openly than the theory of descent that the equality of individuals, toward which socialism tends, is an impossibility; that this chimerical equality is in absolute contradiction with the necessary and, in fact, universal inequality of individuals.

"Socialism demands for all citizens equal rights, equal duties, equal possessions and equal enjoyments; the theory of descent establishes, on the contrary, that the realization of these hopes is purely and simply impossible; that, in human societies, as in animal societies, neither the rights, nor the duties, nor the possessions, nor the enjoyments of all the members of a society are or ever can be equal.

"The great law of variation teaches—both in the general theory of evolution and in the smaller field of biology where it becomes the theory of descent—that the variety of phenomena flows from an original unity, the diversity of functions from a primitive identity, and the complexity of organization from a primordial simplicity. The conditions of existence for all individuals are, from their very birth, unequal. There must also be taken into consideration the inherited qualities and the innate tendencies which also vary more or less widely. In view of all this, how can the work and the reward be equal for all?

"The more highly the social life is developed, the more important becomes the great principle of the division of labor, the more requisite it becomes for the stable existence of the State as a whole that its members should distribute among themselves the multifarious tasks of life, each performing a single function; and as the labor which must be performed by the individuals, as well as the expenditure of strength, talent, money, etc., which it necessitates, differs more and more, it is natural that the remuneration of this labor should also vary widely. These are facts so simple and so obvious that it seems to me every intelligent and enlightened statesman ought to be an advocate of the theory of descent and the general doctrine of evolution, as the best antidote for the absurd equalitarian, utopian notions of the socialists.

"If one wishes to attribute a political tendency to this English theory,—which is quite permissible,—this tendency can be nothing but aristocratic; by no means can it be democratic, still less socialistic....