Socialism A Summary and Interpretation of Socialist Principles 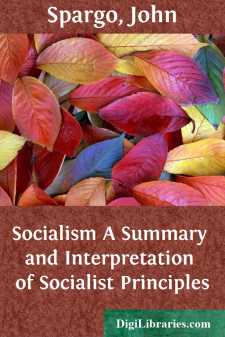 It is not a long time since the kindest estimate of Socialism by the average man was that expressed by Ebenezer Elliott, "the Corn-Law Rhymer," in the once familiar cynical doggerel:—

"What is a Socialist? One who is willing To give up his penny and pocket your shilling."

There was another view, brutally unjust and unkind, expressed in blood-curdling cartoons representing the Socialist as a bomb-throwing assassin. According to the one view, Socialists were all sordid, envious creatures, yearning for the

while the other view represented them as ready to enforce this selfish demand by means of the cowardly weapons of the assassin.

Both these views are now, happily, well-nigh extinct. There is still a great deal of misconception of the meaning of Socialism; the ignorance concerning it which is manifested upon every hand is often disheartening, but neither of these puerile misrepresentations is commonly encountered in serious discussion. It is true that the average newspaper editorial confounds Socialism with Anarchism, often enlisting the prejudice which exists against the most violent forms of Anarchism in attacking Socialism, though the two systems of thought are fundamentally opposed to each other; it is likewise true that Socialists are not infrequently asked to explain their supposed intention to have a great general "dividing-up day" for the equal distribution of all the wealth of the nation. The Chancellor of a great American university returns from a sojourn in Norway, and naïvely hastens to inform the world that he has "refuted" Socialism by asking the members of some poor, struggling sect of Communists what would happen to their scheme of equality if babies should be born after midnight of the day of the equal division of wealth!

Still, when all this has been said, it must be added that these criticisms do not represent the attitude of the mass of people toward the Socialist movement to the same extent as they once did. In serious discussions of the subject among thinking people it is becoming quite rare to encounter either of the two criticisms named. Most of those who seriously and honestly discuss the subject know that modern Socialism comprehends neither assassination nor the equal division of wealth. The enormous interest manifested in Socialism during recent years and the steady growth of the Socialist vote throughout the world bear witness to the fact that the views expressed in the satirical distich of the poet's fancy and the blood-curdling cartoon of the artist's invention are no longer the potent appeals to prejudice they once were....