Social Rights and Duties, Volume I (of 2) Addresses to Ethical Societies 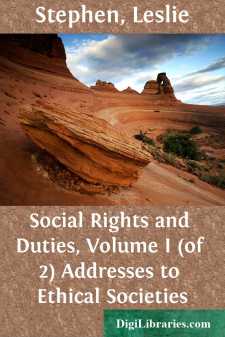 THE AIMS OF ETHICAL SOCIETIES.

I am about to say a few words upon the aims of this society: and I should be sorry either to exaggerate or to depreciate our legitimate pretensions. It would be altogether impossible to speak too strongly of the importance of the great questions in which our membership of the society shows us to be interested. It would, I fear, be easy enough to make an over-estimate of the part which we can expect to play in their solution. I hold indeed, or I should not be here, that we may be of some service at any rate to each other. I think that anything which stimulates an active interest in the vital problems of the day deserves the support of all thinking men; and I propose to consider briefly some of the principles by which we should be guided in doing whatever we can to promote such an interest.

We are told often enough that we are living in a period of important intellectual and social revolutions. In one way we are perhaps inclined even to state the fact a little too strongly. We suffer at times from the common illusion that the problems of to-day are entirely new: we fancy that nobody ever thought of them before, and that when we have solved them, nobody will ever need to look for another solution. To ardent reformers in all ages it seems as if the millennium must begin with their triumph, and that their triumph will be established by a single victory. And while some of us are thus sanguine, there are many who see in the struggles of to-day the approach of a deluge which is to sweep away all that once ennobled life. The believer in the old creeds, who fears that faith is decaying, and the supernatural life fading from the world, denounces the modern spirit as materialising and degrading. The conscience of mankind, he thinks, has become drugged and lethargic; our minds are fixed upon sensual pleasures, and our conduct regulated by a blind struggle for the maximum of luxurious enjoyment. The period in his eyes is a period of growing corruption; modern society suffers under a complication of mortal diseases, so widely spread and deeply seated that at present there is no hope of regeneration. The best hope is that its decay may provide the soil in which seed may be sown of a far-distant growth of happier augury. Such dismal forebodings are no novelty. Every age produces its prophecies of coming woes. Nothing would be easier than to make out a catena of testimonies from great men at every stage of the world's history, declaring each in turn that the cup of iniquity was now at last overflowing, and that corruption had reached so unprecedented a step that some great catastrophe must be approaching. A man of unusually lofty morality is, for that reason, more keenly sensitive to the lowness of the average standard, and too easily accepts the belief that the evils before his eyes must be in fact greater, and not, as may perhaps be the case, only more vividly perceived, than those of the bygone ages. A call to repentance easily takes the form of an assertion that the devil is getting the upper hand; and we may hope that the pessimist view is only a form of the discontent which is a necessary condition of improvement....