Social Life in the Insect World 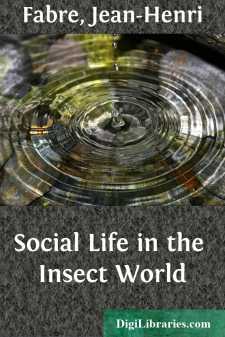 CHAPTER I THE FABLE OF THE CIGALE AND THE ANT

Fame is the daughter of Legend. In the world of creatures, as in the world of men, the story precedes and outlives history. There are many instances of the fact that if an insect attract our attention for this reason or that, it is given a place in those legends of the people whose last care is truth.

For example, who is there that does not, at least by hearsay, know the Cigale? Where in the entomological world shall we find a more famous reputation? Her fame as an impassioned singer, careless of the future, was the subject of our earliest lessons in repetition. In short, easily remembered lines of verse, we learned how she was destitute when the winter winds arrived, and how she went begging for food to the Ant, her neighbour. A poor welcome she received, the would-be borrower!—a welcome that has become proverbial, and her chief title to celebrity. The petty malice of the two short lines—

has done more to immortalise the insect than her skill as a musician. "You sang! I am very glad to hear it! Now you can dance!" The words lodge in the childish memory, never to be forgotten. To most Englishmen—to most Frenchmen even—the song of the Cigale is unknown, for she dwells in the country of the olive-tree; but we all know of the treatment she received at the hands of the Ant. On such trifles does Fame depend! A legend of very dubious value, its moral as bad as its natural history; a nurse's tale whose only merit is its brevity; such is the basis of a reputation which will survive the wreck of centuries no less surely than the tale of Puss-in-Boots and of Little Red Riding-Hood.

The child is the best guardian of tradition, the great conservative. Custom and tradition become indestructible when confided to the archives of his memory. To the child we owe the celebrity of the Cigale, of whose misfortunes he has babbled during his first lessons in recitation. It is he who will preserve for future generations the absurd nonsense of which the body of the fable is constructed; the Cigale will always be hungry when the cold comes, although there were never Cigales in winter; she will always beg alms in the shape of a few grains of wheat, a diet absolutely incompatible with her delicate capillary "tongue"; and in desperation she will hunt for flies and grubs, although she never eats.

Whom shall we hold responsible for these strange mistakes? La Fontaine, who in most of his fables charms us with his exquisite fineness of observation, has here been ill-inspired. His earlier subjects he knew down to the ground: the Fox, the Wolf, the Cat, the Stag, the Crow, the Rat, the Ferret, and so many others, whose actions and manners he describes with a delightful precision of detail. These are inhabitants of his own country; neighbours, fellow-parishioners. Their life, private and public, is lived under his eyes; but the Cigale is a stranger to the haunts of Jack Rabbit. La Fontaine had never seen nor heard her. For him the celebrated songstress was certainly a grasshopper.

Grandville, whose pencil rivals the author's pen, has fallen into the same error. In his illustration to the fable we see the Ant dressed like a busy housewife. On her threshold, beside her full sacks of wheat, she disdainfully turns her back upon the would-be borrower, who holds out her claw—pardon, her hand. With a wide coachman's hat, a guitar under her arm, and a skirt wrapped about her knees by the gale, there stands the second personage of the fable, the perfect portrait of a grasshopper. Grandville knew no more than La Fontaine of the true Cigale; he has beautifully expressed the general confusion.

But La Fontaine, in this abbreviated history, is only the echo of another fabulist. The legend of the Cigale and the cold welcome of the Ant is as old as selfishness: as old as the world. The children of Athens, going to school with their baskets of rush-work stuffed with figs and olives, were already repeating the story under their breath, as a lesson to be repeated to the teacher. "In winter," they used to say, "the Ants were putting their damp food to dry in the sun. There came a starving Cigale to beg from them. She begged for a few grains. The greedy misers replied: 'You sang in the summer, now dance in the winter.'" This, although somewhat more arid, is precisely La Fontaine's story, and is contrary to the facts....