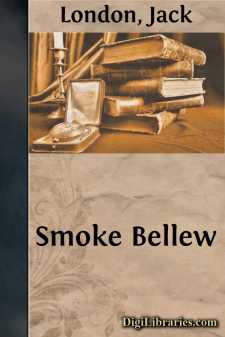 I. THE TASTE OF THE MEAT

In the beginning he was Christopher Bellew. By the time he was at college he had become Chris Bellew. Later, in the Bohemian crowd of San Francisco, he was called Kit Bellew. And in the end he was known by no other name than Smoke Bellew. And this history of the evolution of his name is the history of his evolution. Nor would it have happened had he not had a fond mother and an iron uncle, and had he not received a letter from Gillet Bellamy.

"I have just seen a copy of The Billow," Gillet wrote from Paris. "Of course O'Hara will succeed with it. But he's missing some tricks." Here followed details in the improvement of the budding society weekly. "Go down and see him. Let him think they're your own suggestions. Don't let him know they're from me. If you do, he'll make me Paris correspondent, which I can't afford, because I'm getting real money for my stuff from the big magazines. Above all, don't forget to make him fire that dub who's doing the musical and art criticism. Another thing. San Francisco has always had a literature of her own. But she hasn't any now. Tell him to kick around and get some gink to turn out a live serial, and to put into it the real romance and glamour and colour of San Francisco."

And down to the office of The Billow went Kit Bellew faithfully to instruct. O'Hara listened. O'Hara debated. O'Hara agreed. O'Hara fired the dub who wrote criticisms. Further, O'Hara had a way with him—the very way that was feared by Gillet in distant Paris. When O'Hara wanted anything, no friend could deny him. He was sweetly and compellingly irresistible. Before Kit Bellew could escape from the office, he had become an associate editor, had agreed to write weekly columns of criticism till some decent pen was found, and had pledged himself to write a weekly instalment of ten thousand words on the San Francisco serial—and all this without pay. The Billow wasn't paying yet, O'Hara explained; and just as convincingly had he exposited that there was only one man in San Francisco capable of writing the serial and that man Kit Bellew.

"Oh, Lord, I'm the gink!" Kit had groaned to himself afterward on the narrow stairway.

And thereat had begun his servitude to O'Hara and the insatiable columns of The Billow. Week after week he held down an office chair, stood off creditors, wrangled with printers, and turned out twenty-five thousand words of all sorts. Nor did his labours lighten. The Billow was ambitious. It went in for illustration. The processes were expensive. It never had any money to pay Kit Bellew, and by the same token it was unable to pay for any additions to the office staff.

"This is what comes of being a good fellow," Kit grumbled one day.

"Thank God for good fellows then," O'Hara cried, with tears in his eyes as he gripped Kit's hand. "You're all that's saved me, Kit. But for you I'd have gone bust. Just a little longer, old man, and things will be easier."

"Never," was Kit's plaint. "I see my fate clearly. I shall be here always."

A little later he thought he saw his way out....