Slave Narratives: a Folk History of Slavery in the United States, From Interviews with Former Slaves Virginia Narratives 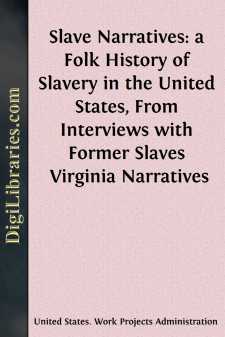 I wuz waitin' on table in dinin' room an' dis day dey had finished eatin' early an' I wuz cleanin' off table. Don't you know I must have been a good size gal.

Yes, I 'member something 'bout him too. I know my Master came home an' said, dat on his way to de gallows ole John stopped an' kissed a little nigger child. "How com' I don't 'member? Don't tell me I don't 'cause I do. I don't care if its done bin a thousand years." I know what Master said an' it is as fresh in my mind as it wuz dat day. Dis is de song I herd my Master sing:

Old John Brown came to Harpers Ferry Town,Purpose to raise an insurrection;Old Governor Wise put the specks upon his eyesAn' showed him the happy land of Canaan.

My Master tole us dat de niggers started the railroad, an' dat a nigger lookin' at a boilin' coffee pot on a stove one day got the idea dat he could cause it to run by putting wheels on it. Dis nigger being a blacksmith put his thoughts into action by makin' wheels an' put coffee on it, an' by some kinder means he made it run an' the idea wuz stole from him an' dey built de steamengine.

I wuz one slave dat de poor white man had his match. See Miss Sue? Dese here ol' white men said, "what I can't do by fair means I'll do by foul." One tried to throw me, but he couldn't. We tusseled an' knocked over chairs an' when I got a grip I scratched his face all to pieces; an dar wuz no more bothering Fannie from him; but oh, honey, some slaves would be beat up so, when dey resisted, an' sometimes if you'll 'belled de overseer would kill yo'. Us Colored women had to go through a plenty, I tell you.

Elder Williams married me in Miss Delia Mann's (white) parlor on de crater road. The house still stands. The house wuz full of Colored people. Miss Sue Jones an' Miss Molley Clark (white), waited on me. Dey took de lamps an' we walked up to de preacher. One waiter joined my han' an' one my husband's han'. After marriage de white folks give me a 'ception; an', honey, talkin' 'bout a table—hit wuz stretched clean 'cross de dinin' room. We had everythin' to eat you could call for. No, didn't have no common eats. We could sing in dar, an' dance ol' squar' dance all us choosed, ha! ha! ha! Lord! Lord! I can see dem gals now on dat flo'; jes skippin' an' a trottin'. An' honey, dar wuz no white folks to set down an' eat 'fo yo'.

Now, Miss Sue, take up. I jes' like to talk to you, honey 'bout dem days ob slavery; 'cause you look like you wan'ta hear all 'bout 'em. All 'bout de ol' rebels; an' dem niggers who left wid de Yankees an' were sat free, but, poor things, dey had no place to go after dey got freed....