Slave Narratives: a Folk History of Slavery in the United States From Interviews with Former Slaves Texas Narratives, Part 1 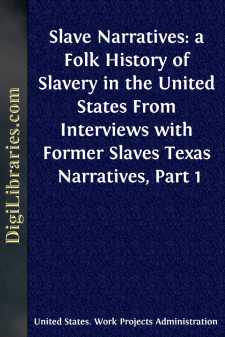 "My folks allus belongs to the Cavins and wore their name till after 'mancipation. Pa and ma was named Freeman and Amelia Cavin and Massa Dave fotches them to Texas from Alabama, along with ma's mother, what we called Maria.

"The Cavins allus thunk lots of their niggers and Grandma Maria say, 'Why shouldn't they—it was their money.' She say there was plenty Indians here when they settled this country and they bought and traded with them without killin' them, if they could. The Indians was poor folks, jus' pilfer and loaf 'round all the time. The niggers was a heap sight better off than they was, 'cause we had plenty to eat and a place to stay.

"Young Massa Tom was my special massa and he still lives here. Old Man Dave seemed to think more of his niggers than anybody and we thunk lots of our white folks. My pa was leader on the farm, and there wasn't no overseer or driver. When pa whip a nigger he needn't go to Massa Dave, but pa say, 'Go you way, you nigger. Freeman didn't whip you for nothin'.' Massa Dave allus believe pa, 'cause he tells the truth.

"One time a peddler come to our house and after supper he goes to see 'bout his pony. Pa done feed that pony fifteen ears of corn. The peddler tell massa his pony ain't been fed nothin', and massa git mad and say, 'Be on you way iffen you gwine 'cuse my niggers of lyin'.'

"We had good quarters and plenty to eat. I 'members when I's jus' walkin' round good pa come in from the field at night and taken me out of bed and dress me and feed me and then play with me for hours. Him bein' leader, he's gone from 'fore day till after night. The old heads got out early but us young scraps slep' till eight or nine o'clock, and don't you think Massa Dave ain't comin' round to see we is fed. I 'members him like it was yest'day, comin' to the quarters with his stick and askin' us, 'Had your breakfas'?' We'd say, 'Yes, suh.' Then he'd ask if we had 'nough or wanted any more. It look like he taken a pleasure in seein' us eat. At dinner, when the field hands come in, it am the same way. He was sho' that potlicker was fill as long as the niggers want to eat.

"The hands worked from sun to sun. Massa give them li'l crops and let them work them on Saturday. Then he bought the stuff and the niggers go to Jefferson and buy clothes and sech like. Lots saved money and bought freedom 'fore the war was over.

"On Christmas we had all we could eat and drink and after that a big party, and you ought to see them gals swingin' they partners round. Then massa have two niggers wrestle, and our sports and dances was big sport for the white folks. They'd sit on the gallery and watch the niggers put it on brown.

"Massa didn't like his niggers to marry off the place, but sometimes they'd do it, and massa tell his neighbor, 'My nigger am comin' to you place. Make him behave.' All the niggers 'haved then and they wasn't no Huntsville and gallows and burnin's then....