Slave Narratives: a Folk History of Slavery in the United States From Interviews with Former Slaves Ohio Narratives 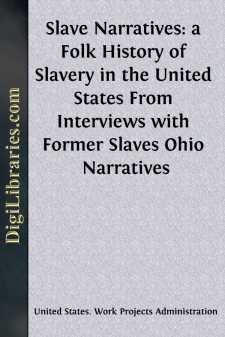 "Life experience excels all reading. Every place you go, you learn something from every class of people. Books are just for a memory, to keep history and the like, but I don't have to go huntin' in libraries, I got one in my own head, for you can't forget what you learn from experience."

The old man speaking is a living example of his theory, and, judging from his bearing, his experience has given him a philosophical outlook which comprehends love, gentleness and wisdom. Charles H. Anderson, 3122 Fredonia Street, was born December 23, 1845, in Richmond, Virginia, as a slave belonging to J.L. Woodson, grocer, "an exceedingly good owner—not cruel to anyone".

With his mother, father, and 15 brothers and sisters, he lived at the Woodson home in the city, some of the time in a cabin in the rear, but mostly in the "big house". Favored of all the slaves, he was trusted to go to the cash drawer for spending money, and permitted to help himself to candy and all he wanted to eat. With the help of the mistress, his mother made all his clothes, and he was "about as well dressed as anybody".

"I always associated with high-class folks, but I never went to church then, or to school a day in my life. My owner never sent me or my brothers, and then when free schools came in, education wasn't on my mind. I just didn't think about education. Now, I read a few words, and I can write my name. But experience is what counts most."

Tapping the porch floor with his cane for emphasis, the old fellow's softly slurred words fell rapidly but clearly. Sometimes his tongue got twisted, and he had to repeat. Often he had to switch his pipe from one side of his mouth to the other; for, as he explained, "there ain't many tooth-es left in there". Mr. Anderson is rather slight of build, and his features are fine, his bald head shiny, and his eyes bright and eager. Though he says he "ain't much good anymore", he seems half a century old instead of "92 next December, if I can make it".

"I have been having some sick spells lately, snapped three or four ribs out of place several years ago, and was in bed for six weeks after my wife died ten year ago. But my step-daughter here nursed me through it. Doctor says he doesn't see how I keep on living. But they take good care of me, my sons and step-daughter. They live here with me, and we're comfortable."

And comfortable, neat, and clean they are in the trimmest little frame house on the street, painted grey with green trim, having a square of green lawn in front and another in back enclosed with a rail fence, gay flowers in the corners, rubber plants in pots on the porch, and grape arbor down one side of the back yard. Inside, rust-colored mohair overstuffed chairs and davenport look prim with white, crocheted doilies, a big clock with weights stands in one corner on an ornately carved table, and several enlarged framed photographs hang on the wall. The other two rooms are the combined kitchen and dining room, and a bedroom with a heatrola in it "to warm an old man's bones"....