Sketches of the Natural History of Ceylon 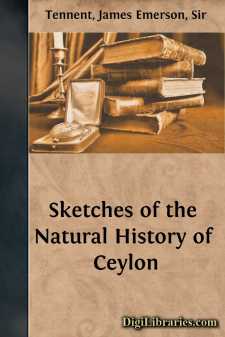 A considerable portion of the contents of the present volume formed the zoological section of a much more comprehensive work recently published, on the history and present condition of Ceylon. But its inclusion there was a matter of difficulty; for to have altogether omitted the chapters on Natural History would have impaired the completeness of the plan on which I had attempted to describe the island; whilst to insert them as they here appear, without curtailment, would have encroached unduly on the space required for other essential topics. In this dilemma, I was obliged to adopt the alternative of so condensing the matter as to bring the whole within the prescribed proportions.

But this operation necessarily diminished the general interest of the subjects treated, as well by the omission of incidents which would otherwise have been retained, as by the exclusion of anecdotes calculated to illustrate the habits and instincts of the animals described.

A suggestion to re-publish these sections in an independent form has afforded an opportunity for repairing some of these defects by revising the entire, restoring omitted passages, and introducing fresh materials collected in Ceylon; the additional matter occupying a very large portion of the present volume.

I have been enabled, at the same time, to avail myself of the corrections and communications of scientific friends; and thus to compensate, in some degree for what is still incomplete, by increased accuracy in minute particulars.

In the Introduction to the First Edition of the original work I alluded, in the following terms, to that portion of it which is now reproduced in an extended form:—

"Regarding the fauna of Ceylon, little has been published in any collective form, with the exception of a volume by Dr. KELAART entitled Prodromus Faunæ Zeilanicæ; several valuable papers by Mr. EDGAR L. LAYARD in the Annals and Magazine of Natural History for 1852 and 1853; and some very imperfect lists appended to PRIDHAM'S compiled account of the island. KNOX, in the charming narrative of his captivity, published in the feign of Charles II., has devoted a chapter to the animals of Ceylon, and Dr. DAVY has described some of the reptiles: but with these exceptions the subject is almost untouched in works relating to the colony. Yet a more than ordinary interest attaches to the inquiry, since Ceylon, instead of presenting, as is generally assumed, an identity between its fauna and that of Southern India, exhibits a remarkable diversity, taken in connection with the limited area over which the animals included in it are distributed. The island, in fact, may be regarded as the centre of a geographical circle, possessing within itself forms, whose allied species radiate far into the temperate regions of the north, as well as in to Africa, Australia, and the isles of the Eastern Archipelago.

"In the chapters that I have devoted to its elucidation, I have endeavoured to interest others in the subject, by describing my own observations and impressions, with fidelity, and with as much accuracy as may be expected from a person possessing, as I do, no greater knowledge of zoology and the other physical sciences than is ordinarily possessed by any educated gentleman....