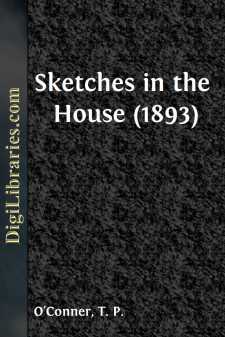 CHAPTER I. OPENING OF A HISTORIC SESSION. Memories.

There is always something that depresses, as well as something that exhilarates, in the first day of a Session of Parliament. In the months which have elapsed, there have been plenty of events to emphasize the mutability and the everlasting tragedy of human life. Some men have died; figures that seemed almost the immortal portion of the life of Parliament have disappeared into night, and their place knows them no more; others have met the fate, more sinister and melancholy, of changing a life of dignity and honour for one of ignominy and shame.

The irony of the seats.

But no such thought disturbed the cheerful souls of some of the Irish Members; in the worst of times there is something exuberant in the Celt that rises superior to circumstance. This was to be an Irish Session; and the great fight of Ireland's future government was to be fought—perhaps finally. But there was another circumstance which distinguished this Session from its predecessors. The question of seats is always a burning one in the House of Commons. In an assembly in which there is only sitting accommodation for two out of every three members, there are bound to be some awkward questions when feeling runs high and debates are interesting. But at the beginning of this Session, things had got to a worse pass than ever. The Irish Party resolved to remain on the Opposition side of the House, true to their principle, that until Ireland receives Home Rule, they are in opposition to all and every form of Government from Westminster. The result was the bringing together of the strangest of bedfellows in all sections in the House. There is none so fiercely opposed to Home Rule as the Irish Orangeman. But the Orangemen are a portion of the Opposition as well as the Irish Nationalists, with the inconvenient result that there sat cheek by jowl men who had about as much love for each other's principles as a country vicar has for a Northampton Freethinker. On the other hand, a deadlier hatred exists between the regular Liberal and the Liberal Unionist than between the ordinary Liberal and the ordinary Tory. But by the irony of fate, the action of the Irish Party compelled the Unionists to sit on the Liberal benches again, with the result that men were ranged side by side, whose hatreds, personal and political, were as deadly as any in the House.

Watchers for the dawn.

As a result of all this, there occurred in the House on Tuesday morning, January 31st, a scene unparalleled since the famous day when Mr. Gladstone brought in his Home Rule Bill in 1886. Night was still fighting the hosts of advancing morn, when a Tory Member—Mr. Seton-Karr—approached the closed doors of the House of Commons, and demanded admission to a seat. For nearly an hour he was left alone with the darkness, and the ghosts of dead statesmen and forgotten scenes of oratory, passion, and triumph. But as six o'clock was striking, there entered the yard around the House two figures—similar in purpose—different in appearance. Mr. Johnson, of Ballykilbeg, is by this time one of the familiar types of the House; and, from his evident sincerity, is, in spite of the terrible and mediæval narrowness of his creed, personally popular. Mr. Johnson is an Orangeman of Orangemen. Now and then he delivers a speech, in which he declares that rather than see Home Rule in Ireland, he and his friends will line the ditches with riflemen. The Pope disturbs his dreams by night and stalks across his speeches by day; and there is a general impression about him that he is resolved, some time or other, to walk through a good large stream of Papist blood. He is also a violent teetotaller; and is so strong on this point that he is ready to shake hands, even with the deadliest Irish opponent, across the back of a Sunday Closing Bill. Like most Parliamentary fire-eaters, he is a mild-mannered man. Time hath dealt tenderly with him. But still he is well on to the seventies: his hair, once belligerently red, is thin and streaked with grey; and he walks somewhat slowly, and not very vigorously....