Sketches and Studies in Italy and Greece, Third series 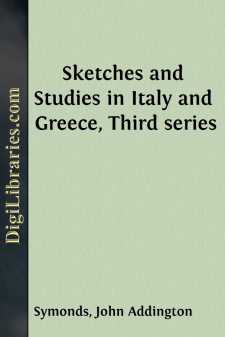 Students of Mr. Dante Gabriel Rossetti's translations from the early Italian poets (Dante and his Circle. Ellis & White, 1874) will not fail to have noticed the striking figure made among those jejune imitators of Provençal mannerism by two rhymesters, Cecco Angiolieri and Folgore da San Gemignano. Both belong to the school of Siena, and both detach themselves from the metaphysical fashion of their epoch by clearness of intention and directness of style. The sonnets of both are remarkable for what in the critical jargon of to-day might be termed realism. Cecco is even savage and brutal. He anticipates Villon from afar, and is happily described by Mr. Rossetti as the prodigal, or 'scamp' of the Dantesque circle. The case is different with Folgore. There is no poet who breathes a fresher air of gentleness. He writes in images, dealing but little with ideas. Every line presents a picture, and each picture has the charm of a miniature fancifully drawn and brightly coloured on a missal-margin. Cecco and Folgore alike have abandoned the mediæval mysticism which sounds unreal on almost all Italian lips but Dante's. True Italians, they are content to live for life's sake, and to take the world as it presents itself to natural senses. But Cecco is perverse and impious. His love has nothing delicate; his hatred is a morbid passion. At his worst or best (for his best writing is his worst feeling) we find him all but rabid. If Caligula, for instance, had written poetry, he might have piqued himself upon the following sonnet; only we must do Cecco the justice of remembering that his rage is more than half ironical and humorous:—

An I were fire, I would burn up the world; An I were wind, with tempest I'd it break; An I were sea, I'd drown it in a lake; An I were God, to hell I'd have it hurled; An I were Pope, I'd see disaster whirled O'er Christendom, deep joy thereof to take; An I were Emperor, I'd quickly make All heads of all folk from their necks be twirled; An I were death, I'd to my father go; An I were life, forthwith from him I'd fly; And with my mother I'd deal even so; An I were Cecco, as I am but I, Young girls and pretty for myself I'd hold, But let my neighbours take the plain and old.

Of all this there is no trace in Folgore. The worst a moralist could say of him is that he sought out for himself a life of pure enjoyment. The famous Sonnets on the Months give particular directions for pastime in a round of pleasure suited to each season. The Sonnets on the Days are conceived in a like hedonistic spirit. But these series are specially addressed to members of the Glad Brigades and Spending Companies, which were common in the great mercantile cities of mediæval Italy. Their tone is doubtless due to the occasion of their composition, as compliments to Messer Nicholò di Nisi and Messer Guerra Cavicciuoli.

The mention of these names reminds me that a word need be said about the date of Folgore. Mr. Rossetti does not dispute the commonly assigned date of 1260, and takes for granted that the Messer Nicolò of the Sonnets on the Months was the Sienese gentleman referred to by Dante in a certain passage of the 'Inferno':—

And to the Poet said I: 'Now was ever So vain a people as the Sienese...?
Show more
Show less