Sketches and Studies in Italy and Greece, Second Series 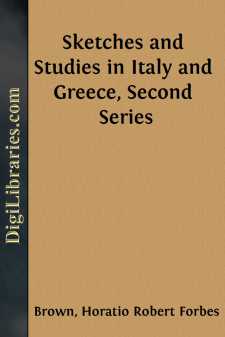 The Emperor Augustus chose Ravenna for one of his two naval stations, and in course of time a new city arose by the sea-shore, which received the name of Portus Classis. Between this harbour and the mother city a third town sprang up, and was called Cæsarea. Time and neglect, the ravages of war, and the encroaching powers of Nature have destroyed these settlements, and nothing now remains of the three cities but Ravenna. It would seem that in classical times Ravenna stood, like modern Venice, in the centre of a huge lagune, the fresh waters of the Ronco and the Po mixing with the salt waves of the Adriatic round its very walls. The houses of the city were built on piles; canals instead of streets formed the means of communication, and these were always filled with water artificially conducted from the southern estuary of the Po. Round Ravenna extended a vast morass, for the most part under shallow water, but rising at intervals into low islands like the Lido or Murano or Torcello which surround Venice. These islands were celebrated for their fertility: the vines and fig-trees and pomegranates, springing from a fat and fruitful soil, watered with constant moisture, and fostered by a mild sea-wind and liberal sunshine, yielded crops that for luxuriance and quality surpassed the harvests of any orchards on the mainland. All the conditions of life in old Ravenna seem to have resembled those of modern Venice; the people went about in gondolas, and in the early morning barges laden with fresh fruit or meat and vegetables flocked from all quarters to the city of the sea.[1] Water also had to be procured from the neighbouring shore, for, as Martial says, a well at Ravenna was more valuable than a vineyard. Again, between the city and the mainland ran a long low causeway all across the lagune like that on which the trains now glide into Venice. Strange to say, the air of Ravenna was remarkably salubrious: this fact, and the ease of life that prevailed there, and the security afforded by the situation of the town, rendered it a most desirable retreat for the monarchs of Italy during those troublous times in which the empire nodded to its fall. Honorius retired to its lagunes for safety; Odoacer, who dethroned the last Cæsar of the West, succeeded him; and was in turn, supplanted by Theodoric the Ostrogoth. Ravenna, as we see it now, recalls the peaceful and half-Roman rule of the great Gothic king. His palace, his churches, and the mausoleums in which his daughter Amalasuntha laid the hero's bones, have survived the sieges of Belisarius and Astolphus, the conquest of Pepin, the bloody quarrels of Iconoclasts with the children of the Roman Church, the mediæval wars of Italy, the victory of Gaston de Foix, and still stand gorgeous with marbles and mosaics in spite of time and the decay of all around them.

As early as the sixth century, the sea had already retreated to such a distance from Ravenna that orchards and gardens were cultivated on the spot where once the galleys of the Cæsars rode at anchor....