Sketches and Studies in Italy and Greece, First Series 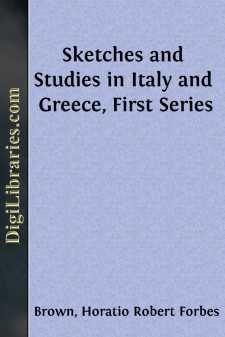 THE LOVE OF THE ALPS

Of all the joys in life, none is greater than the joy of arriving on the outskirts of Switzerland at the end of a long dusty day's journey from Paris. The true epicure in refined pleasures will never travel to Basle by night. He courts the heat of the sun and the monotony of French plains,—their sluggish streams and never-ending poplar trees—for the sake of the evening coolness and the gradual approach to the great Alps, which await him at the close of the day. It is about Mulhausen that he begins to feel a change in the landscape. The fields broaden into rolling downs, watered by clear and running streams; the green Swiss thistle grows by riverside and cowshed; pines begin to tuft the slopes of gently rising hills; and now the sun has set, the stars come out, first Hesper, then the troop of lesser lights; and he feels—yes, indeed, there is now no mistake—the well-known, well-loved magical fresh air, that never fails to blow from snowy mountains and meadows watered by perennial streams. The last hour is one of exquisite enjoyment, and when he reaches Basle, he scarcely sleeps all night for hearing the swift Rhine beneath the balconies, and knowing that the moon is shining on its waters, through the town, beneath the bridges, between pasture-lands and copses, up the still mountain-girdled valleys to the ice-caves where the water springs. There is nothing in all experience of travelling like this. We may greet the Mediterranean at Marseilles with enthusiasm; on entering Rome by the Porta del Popolo, we may reflect with pride that we have reached the goal of our pilgrimage, and are at last among world-shaking memories. But neither Rome nor the Riviera wins our hearts like Switzerland. We do not lie awake in London thinking of them; we do not long so intensely, as the year comes round, to revisit them. Our affection is less a passion than that which we cherish for Switzerland.

Why, then, is this? What, after all, is the love of the Alps, and when and where did it begin? It is easier to ask these questions than to answer them. The classic nations hated mountains. Greek and Roman poets talk of them with disgust and dread. Nothing could have been more depressing to a courtier of Augustus than residence at Aosta, even though he found his theatres and triumphal arches there. Wherever classical feeling has predominated, this has been the case. Cellini's Memoirs, written in the height of pagan Renaissance, well express the aversion which a Florentine or Roman felt for the inhospitable wildernesses of Switzerland. Dryden, in his dedication to 'The Indian Emperor,' says, 'High objects, it is true, attract the sight; but it looks up with pain on craggy rocks and barren mountains, and continues not intent on any object which is wanting in shades and green to entertain it.' Addison and Gray had no better epithets than 'rugged,' 'horrid,' and the like for Alpine landscape. The classic spirit was adverse to enthusiasm for mere nature. Humanity was too prominent, and city life absorbed all interests,—not to speak of what perhaps is the weightiest reason—that solitude, indifferent accommodation, and imperfect means of travelling, rendered mountainous countries peculiarly disagreeable....