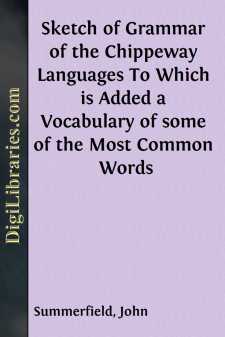 The following pages were written as an exercise for my leisure hours, while attending the Oneida Conference Seminary during the past winter. As it is the first attempt that, to my knowledge, has ever been made to reduce the Chippeway language to any system, it cannot be expected to be otherwise than imperfect, and perhaps may hereafter be found to be, in some respects, erroneous. It is, however, as free from errors as my present means have enabled me to make it. It has been printed at the request of my friends, by a fellow student, at his own suggestion and expense.

There are, in the Chippeway Language, ten parts of Speech, namely, the article, the noun, the pronoun, the adjective, the verb, the participle, the adverb, the preposition, the conjunction, and the interjection.

There is but one Article, used definitely both in the masculine and neuter genders, viz. Owh, the, m.; Ewh, the, n.

A Noun is the name of any person, place, or thing; as, Eneneh, man; Kahdahnahqueeng, Kingston; metig, tree.

Nouns are of two sorts, Common and Proper.

Proper Nouns are the names appropriated to individuals, as, Charles, Cazenovia, Ganges. [N.B. Proper names, with a few exceptions, are the same as in English.]

Gender is the distinction of nouns with regard to sex.

Nouns have three genders, the masculine, the feminine, and the neuter.

The feminine gender is applied to animals, fishes, and birds; as, Nahbak, a she bear, &c.

The neuter gender denotes things without sex; as, Wewahquon, a hat.

Number is the distinction of objects as one or more.

Nouns are of two numbers, the singular and the plural.

The singular number implies but one object; as, Mahzenahegun, a book.

The plural number implies more than one; as, Mahzhenahegahnun, books.

Nouns have three cases, the nominative, the possessive, and the objective.

The nominative case simply expresses the name of a thing, &c.; as, Owh quewesanceoobahkahmegezeh, the boy plays.

The possessive case expresses the relation of property or possession, and always ends with the letter o; as, Noosayo wegewaum, my father's house.

The objective case expresses the object of an action or of relation; as John owejeahn Charles, John assists Charles.

Nouns may be declined in the following manner: