Six Years in the Prisons of England 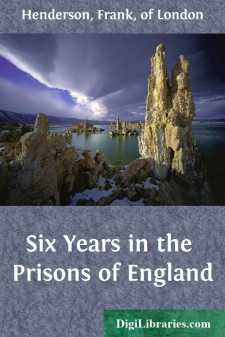 Add to My Favorites
Published: 9 years ago
Downloads: 93
Rating: (0 Votes)

MY COMMERCIAL ANTECEDENTS—HOW I GOT INTO PRISON.

In the beginning of the year 1856 I commenced business on my own account, as a merchant in a Northern City. Previous to that time I had been engaged in an unsuccessful partnership, but I paid my creditors in full with the small capital advanced to me by my friends for the purpose of my new adventure. When I began operations, therefore, I was literally without a shilling in the world, but I had a spotless character, enjoyed good credit, and possessed a thorough knowledge of my business; advantages which I easily persuaded myself would enable me to succeed without the actual possession of capital.—My business connections were scattered over various parts of the world, and generally ranked among the very best class of foreign merchants. I usually received orders by letter, sometimes I gave open credits to houses whose orders I could not otherwise secure, but frequently I had remittances long before the merchandise could arrive at its destination. The trade was one of confidence, requiring both character and position for its development, and had I been prudent enough to confine myself strictly to this branch of the business, I would now, without doubt, have been a wealthy and successful merchant. At the end of my first year's operations my ledger showed a satisfactory balance to my credit. The year 1857 opened auspiciously, and I continued to prosper almost to the end of it, when a storm swept over the commercial world, which involved hundreds of firms in bankruptcy and ruin.

From the nature of my business it was scarcely possible I could escape, and although I succeeded in avoiding bad debts, I incurred indirect losses to a very considerable amount. In May, 1858, I paid a visit to the Continent, in order to ascertain on the spot how my connections there had weathered the recent storm. This visit resulted in a large increase of legitimate business, and up to this point I had taken no false step. Shortly afterwards, however, I was induced to embark in two different and distinct branches of trade, which led to my ruin. The first was the manufacture of novelties, which, after a large expenditure, I was obliged to relinquish, in consequence of my not having sufficient capital to make it profitable. The second was a mercantile business, managed by an agent resident on the Continent. This agent was without means, and, as I afterwards found, without the abilities necessary for the position. He had not long commenced operations when a war broke out in Lombardy, which furnished his customers with an excuse for rejecting the goods they had ordered before prices began to recede. The consequence was that I had thousands of pounds' worth of goods thrown upon my hands abroad, which resulted in large direct and still larger indirect losses. It was at this juncture that I ought to have stopped payment, but, being of a sanguine disposition, and my regular business continuing to prosper, I hoped the successes in the one branch would balance the losses in the other, and I resolved to struggle on....