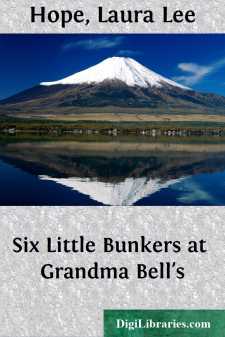 CHAPTER I ALL UPSET

"There! It's all done, so I guess we can get on and start off! All aboard! Toot! Toot!" Russ Bunker made a noise like a steamboat whistle. "Get on!" he cried.

"I won't," promised the little boy, as he tossed back a lock of dark hair which had straggled down over his eyes. They were dark, too, and, just now, were shining in eagerness as he looked at a queer collection of a barrel, a box, some chairs, a stool and a few boards, piled together in the middle of the playroom floor.

"The steamboat will wait for you, Rose," Russ Bunker went on. "But hurry back," and he began to whistle a merry tune as he moved a footstool over to one side. "That's one of the paddle-wheels," he told his smaller brother Laddie, whose real name was Fillmore, but who was always called Laddie. "That's a paddle-wheel!"

"Why doesn't it go 'round then?" asked Violet, Laddie's twin sister. "Why doesn't it go 'round, Russ? I thought wheels always went around!" Vi, as Violet was usually called, loved to ask questions, and sometimes they were the kind that could not be easily answered. This one seemed to be that kind, for Russ went on whistling and did not reply.

"Why doesn't the footstool go around if it's a wheel?" asked Vi again.

"Oh, 'cause—'cause——" began Russ, holding his head on one side and stopping halfway through his whistled tune. "It doesn't go 'round?"

"All wheels go around," declared Russ, who, now that he had the footstool fixed where he wanted it, had started his whistling again.

"What's the riddle, Laddie?" asked Vi, shaking her curly hair and looking up with her gray eyes at her brother, whose locks were of the same color, though not quite so curly as his twin's.

"There she goes again! Asking more questions!" exclaimed Rose, who had come back from putting away the broom, and was ready to play the steamboat game with her older brother.

"What kind of a wheel doesn't go 'round?" asked Laddie again, smiling at his brothers and sisters as though the riddle was a very hard one indeed.

"Pooh! All wheels go around—'ceptin' this one, maybe," said Russ. "And this is only a make-believe wheel. It's the nearest like a steamboat paddle-wheel I could find," and he gave the footstool a little kick. "But all kinds of wheels go around, Laddie."

"No, they don't," exclaimed the little fellow. "That's a riddle! What kind of a wheel doesn't go 'round?"

"Oh, let's give it up," proposed Rose. "Tell us, Laddie, and then we'll get in the make-believe steamboat Russ has made, and we'll have a ride. What kind of a wheel doesn't go around?"

"But the barrow doesn't—that's the part you put things in," went on Laddie. "That doesn't go 'round. You have to push it."

"All right. That's a pretty good riddle," said Russ with a laugh. "Now let's get on the steamboat and we'll have a ride," and he began to whistle a little bit of a new song, something about down on a river where the cotton blossoms grow.

"Where is steamboat?" asked Margy, aged five, whose real name was Margaret, but who, as yet, seemed too little to have all those letters for herself....