Six Letters From the Colonies 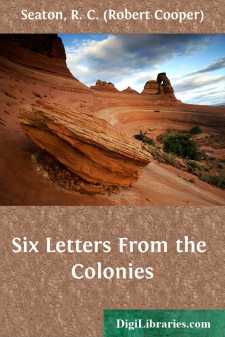 I.The Voyage of the Hampshire.

Voyage to Australia has in these days become so ordinary an affair that it may seem to require an apology to attempt to describe one, but a voyage in a sailing ship is so different from that in a steamer that it may interest some people. It is, as a rule, only those who go abroad for their health who prefer a sailing ship, on account of the great length of the voyage, in allusion to which steam people call sailing ships "wind jammers," while the sailors retort on steamers by dubbing them "iron tanks" and "old coffins." There is no doubt that the picturesqueness of a sea voyage is quite destroyed by a steamer. There are no, or very few, regular sailors on board; so much of the work is now done by steam. There are no "chanties" or sailors' songs, which help the work to go easily. In a steamer there is no interest in noting the course—they go straight on, and the distance covered does not vary, or only slightly, from day to day. The movement of a sailing ship through the water at 12 knots per hour is quite exhilarating; the ship hurries on by "leaps and bounds." Contrast with this the labouring plunges of a screw-steamer at the same rate. In short, romance is perishing from the sea with the universal invasion of steam. Could the poet have thus written of the Pirate—

"O'er the glad waters of the deep blue sea,Our thoughts as boundless, and our souls as free,"

if the Pirate was master of a steamer? I think not. However, I do not deny that a steamer has many and great advantages over a ship. The chief advantage, and the only one to which I need allude, is the prosaic but not unimportant one of better food, and this with many people would decide in favour of a steamer. Perhaps we were exceptionally unfortunate in this respect. The Hampshire is a barque of 1,100 tons, and belonging to Captain Hosack, of Liverpool. She is most commodious; the cabins are much larger than is usual in a vessel of this size. Mine was not a large one, but it measured 8ft. by 10ft. 6in. There is, too, a poop deck 70ft. long, which is scarcely ever touched, even by a heavy sea. When people are constantly in each other's society for so long they gradually throw off many of the artificial restraints of society, and exhibit themselves as they would in their own homes. The result is curious. A constant process of natural selection goes on, by which like seeks like, and the estimation in which a particular person is held by his fellow-passengers is often very different at the close of the voyage from what it was at the beginning. Taking all things into consideration, however, I think the saloon passengers on the Hampshire must be considered to have borne the ordeal very well. We were 24 in number—rather too many for comfort—all (with two exceptions) young men, going out to the colonies for various reasons—some for health, some for business. The two exceptions were a Canon of the Church of England and his wife, and another gentleman who was travelling with his nephew. The Canoness was the only lady on board, the result of which probably was that, though the civilising influence imparted by the presence of ladies was lost, yet many jealousies, that might have been thereby occasioned, were avoided.

The Hampshire left the East India Dock early on Thursday morning, the 27th November, commanded by Captain John Mathias. She was towed as far as Beachy Head, but laid up at Deal during the night. At St. Alban's Head we parted with the pilot. On the Monday we left the Lizard behind. The next ten days were the most unpleasant of the whole voyage. We were tossed about in the Bay of Biscay, making scarcely any progress. One day we even made 16 miles leeway. It was, perhaps, well that this happened so early on, as all seasickness was thus comfortably got over. Since that time the weather may be shortly dismissed. Captain Mathias, the officers, and crew all declare they have never had so fine a voyage to Australia....