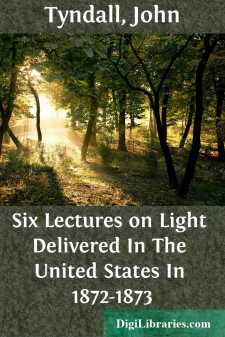 Some twelve years ago I published, in England, a little book entitled the 'Glaciers of the Alps,' and, a couple of years subsequently, a second book, entitled 'Heat a Mode of Motion.' These volumes were followed by others, written with equal plainness, and with a similar aim, that aim being to develop and deepen sympathy between science and the world outside of science. I agreed with thoughtful men who deemed it good for neither world to be isolated from the other, or unsympathetic towards the other, and, to lessen this isolation, at least in one department of science, I swerved, for a time, from those original researches which have been the real pursuit and pleasure of my life.

The works here referred to were, for the most part, republished by the Messrs. Appleton of New York, under the auspices of a man who is untiring in his efforts to diffuse sound scientific knowledge among the people of the United States; whose energy, ability, and single-mindedness, in the prosecution of an arduous task, have won for him the sympathy and support of many of us in 'the old country.' I allude to Professor Youmans. Quite as rapidly as in England, the aim of these works was understood and appreciated in the United States, and they brought me from this side of the Atlantic innumerable evidences of good-will. Year after year invitations reached me to visit America, and last year (1871) I was honoured with a request so cordial, signed by five-and-twenty names, so distinguished in science, in literature, and in administrative position, that I at once resolved to respond to it by braving not only the disquieting oscillations of the Atlantic, but the far more disquieting ordeal of appearing in person before the people of the United States.

This invitation, conveyed to me by my accomplished friend Professor Lesley, of Philadelphia, and preceded by a letter of the same purport from your scientific Nestor, the celebrated Joseph Henry, of Washington, desired that I should lecture in some of the principal cities of the Union. This I agreed to do, though much in the dark as to a suitable subject. In answer to my inquiries, however, I was given to understand that a course of lectures, showing the uses of experiment in the cultivation of Natural Knowledge, would materially promote scientific education in this country. And though such lectures involved the selection of weighty and delicate instruments, and their transfer from place to place, I determined to meet the wishes of my friends, as far as the time and means at my disposal would allow.

§ 2. Subject of the Course. Source of Light employed.

Experiments have two great uses—a use in discovery, and a use in tuition. They were long ago defined as the investigator's language addressed to Nature, to which she sends intelligible replies. These replies, however, usually reach the questioner in whispers too feeble for the public ear. But after the investigator comes the teacher, whose function it is so to exalt and modify the experiments of his predecessor, as to render them fit for public presentation....