Six Days on the Hurricane Deck of a Mule An account of a journey made on mule back in Honduras, C.A. in August, 1891 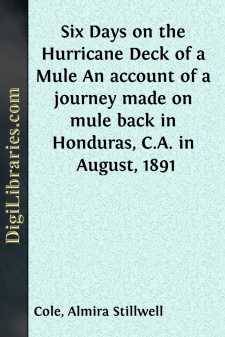 Last spring I almost learned to ride a bicycle.

Those who have had a similar struggle will correctly estimate the exact value of that word almost. I was laboring under peculiar difficulties, for I was a whilom inmate of one of those sacred institutions—a young ladies' boarding-school,—where any infringement upon the Spartan law of dignity would have been looked upon as less pardonable than a simultaneous indulgence in the seven deadly sins.

My agony of mind and body under those circumstances can be better imagined than described. Methought life held no more painful experience, but how impossible it is to gauge endurance and classify suffering I have since learned.

When, later on, I announced to my friends and relatives my intention of taking up a residence in the interior of Honduras for the ensuing five years, I was fairly overwhelmed by the storm of exclamations, reproaches, dire predictions, and tearful expostulations, none of which shook my resolution.

I assured them that the trip was simple enough,—by steamer from New York to Colon, thence by rail to Panama, where a steamer was taken to Amapala, and then over the mountain on mule-back.

One friend in vain tried to move me by drawing dreadful pictures of life with a ruined complexion; another assured me I was going to bury myself among barbarians; a third pointed out the miseries of sea-sickness and the certainty of death from some fever which would be sure to attack me at once, and so ad infinitum.

I bore it all as meekly as possible and with outward patience, but inward raging. I told them I cared more for the complexion of my life than the amount of sun-kissed pigment my skin contained; I would civilize all the barbarians I found; and since others had endured sea-sickness so could I.

However, at last a teasing cousin did hit upon a fact, and a stubborn one, which had tormented me considerably—that mule I was to ride. He assured me that had I ever attempted to ride a wheel I would have some idea of what was in store for me. With a sinking heart but unabashed countenance, I smiled a superior sort of smile and replied that I had learned to ride a wheel.

"Well, a mule is worse," was the reply that somewhat staggered me.

Then I did not believe him, but now I think he must be divinely gifted with the spirit of prophecy.

Sailing day came, and with all the assurance and independence of a typical American young woman, I stood on the deck of a steamer alone, and watched the familiar faces of friends fade into the distance.

Sixteen days later, as I was about to go ashore in Honduras, I audibly wondered why any one should find the journey anything but delightful. Every moment had been an enjoyable one, and I had entirely escaped one of the foretold horrors. Imagine the shadow that crept across the sunshine of my mental vision, when the Captain of the ship I was leaving so regretfully remarked, with a wise and mysterious shake of his head:

"Perhaps you will see why, when you have been for six days on the hurricane deck of a mule."

A youth, considerably my junior, whom I had known well as a schoolboy in the States, had come with two men-servants and six mules to meet me....