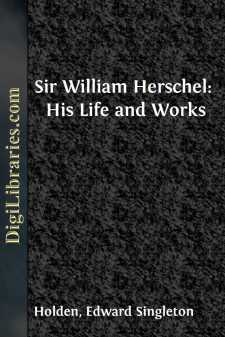 Of the great modern philosophers, that one of whom least is known, is William Herschel. We may appropriate the words which escaped him when the barren region of the sky near the body of Scorpio was passing slowly through the field of his great reflector, during one of his sweeps, to express our own sense of absence of light and knowledge: Hier ist wahrhaftig ein Loch im Himmel.

Herschel prepared, about the year 1818, a biographical memorandum, which his sister Carolina placed among his papers.

This has never been made public. The only thoroughly authentic sources of information in possession of the world, are a letter written by Herschel himself, in answer to a pressing request for a sketch of his life, and the Memoir and Correspondence of Caroline Herschel (London, 1876), a precious memorial not only of his life, but of one which otherwise would have remained almost unknown, and one, too, which the world could ill afford to lose. The latter, which has been ably edited by Mrs. Mary Cornwallis Herschel, is the only source of knowledge in regard to the early years of the great astronomer, and together with the all too scanty materials to be gained from a diligent search through the biography of the time, affords the data for those personal details of his life, habits, and character, which seem to complete the distinct, though partial conception of him which the student of his philosophical writings acquires.

The letter referred to was published in the Göttingen Magazine of Science and Literature, III., 4, shortly after the name of Herschel had become familiar to every ear through his discovery of Uranus, but while the circumstances of the discovery, and the condition of the amateur who made it, were still entirely unknown.

"Herr Herschel was good enough to send me, some time since, through Herr Magellan, copies of his Dissertations on Double Stars, on the Parallax of the Fixed Stars, and on a new Micrometer. In the letter which conveyed to him my thanks for his gift, I requested him to note down a few facts in regard to his life, for publication in this magazine, since various accounts, more or less incorrect, had appeared in several journals. In answer, I received a very obliging letter from him and what follows is that portion of it relating to my request, which was sent me with full permission to make it public."

"I was born in Hanover, November, 1738. My father, who was a [Pg 4] musician, destined me to the same profession, hence I was instructed betimes in his art. That I might acquire a perfect knowledge of the theory as well as of the practice of music, I was set at an early age to study mathematics in all its branches—algebra, conic sections, infinitesimal analysis, and the rest.

"The insatiable desire for knowledge thus awakened resulted next in a course of languages; I learned French, English, and Latin, and steadfastly resolved henceforth to devote myself wholly to those sciences from the pursuit of which I alone looked for all my future happiness and enjoyment. I have never been either necessitated or disposed to alter this resolve. My father, whose means were limited, and who consequently could not be as liberal to his children as he would have desired, was compelled to dispose of them in one way or another at an early age; consequently in my fifteenth year I enlisted in military service, only remaining in the army, however, until I reached my nineteenth year, when I resigned and went over to England....