Sir Walter Scott as a Critic of Literature 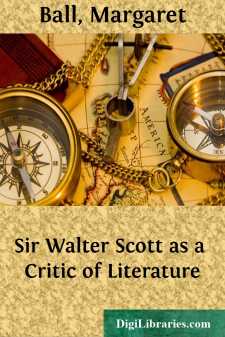 Importance of a study of Scott's critical and scholarly work—Connection between his creative work and his criticism—Chronological view of his literary career.

Scott's critical work has become inconspicuous because of his predominant fame as an imaginative writer; but what it loses on this account it perhaps gains in the special interest attaching to criticism formulated by a great creative artist. One phase of his work is emphasized and explained by the other, and we cannot afford to ignore his criticism if we attempt fairly to comprehend his genius as a poet and novelist. The fact that he is the subject of one of the noblest biographies in our language only increases our obligation to become acquainted with his own presentation of his artistic principles.

But though criticism by so great and voluminous a writer is valuable mainly because of the important relation it bears to his other work, and because of the authority it derives from this relation, Scott's scholarly and critical writings are individual enough in quality and large enough in extent to demand consideration on their own merits. Yet this part of his achievement has received very little attention from biographers and critics. Lockhart's book is indeed full of materials, and contains also some suggestive comment on the facts presented; but as the passing of time has made an estimation of Scott's power more safe, students have lost interest in his work as a critic, and recent writers have devoted little attention to this aspect of the great man of letters.

The present study is an attempt to show the scope and quality of Scott's critical writings, and of such works, not exclusively or mainly critical, as exhibit the range of his scholarship. For it is impossible to treat his criticism without discussing his scholarship; since, lightly as he carried it, this was of consequence in itself and in its influence on all that he did. The materials for analysis are abundant; and by rearrangement and special study they may be made to contribute both to the history of criticism and to our comprehension of the power of a great writer. In considering him from this point of view we are bound to remember the connection between the different parts of his vocation. In him, more than in most men of letters, the critic resembled the creative writer, and though the critical temperament seems to show itself but rarely in his romances, we find that the characteristic absence of precise and conscious art is itself in harmony with his critical creed.

The relation between the different parts of Scott's literary work is exemplified by the subjects he treated, for as a critic he touched many portions of the field, which in his capacity of poet and novelist he occupied in a different way. He was a historical critic no less than a historical romancer. A larger proportion of his criticism concerns itself with the eighteenth century, perhaps, than of his fiction, and he often wrote reviews of contemporary literature, but on the whole the literature with which he dealt critically was representative of those periods of time which he chose to portray in novel and poem....