Sir Thomas Browne and his 'Religio Medici' an Appreciation 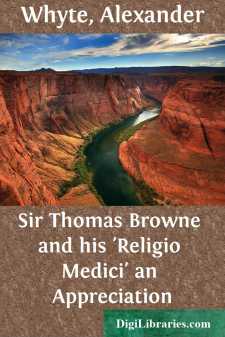 The Religio Medici is a universally recognised English classic.  And the Urn-Burial, the Christian Morals, and the Letter to a Friend are all quite worthy to take their stand beside the Religio Medici.  Sir Thomas Browne made several other contributions to English literature besides these masterpieces; but it is on the Religio Medici, and on what Sir Thomas himself calls ‘other pieces of affinity thereto,’ that his sure fame as a writer of noble truth and stately English most securely rests.  Sir Thomas Browne was a physician of high standing and large practice all his days; and he was an antiquarian and scientific writer of the foremost information and authority: but it is the extraordinary depth and riches and imaginative sweep of his mind, and his rare wisdom and wealth of heart, and his quite wonderful English style, that have all combined together to seal Sir Thomas Browne with his well-earned immortality.

Sir Thomas Browne’s outward life can be told in a very few words.  He was born at London in 1605.  He lost his father very early, and it must have been a very great loss.  For the old mercer was wont to creep up to his little son’s cradle when he was asleep, and uncover and kiss the child’s breast, and pray, ‘as ’tis said of Origen’s father, that the Holy Ghost would at once take possession there.’  The old merchant was able to leave money enough to take his gifted son first to Winchester School, and then to Oxford, where he graduated in New Pembroke in 1626.  On young Browne’s graduation, old Anthony à Wood has this remark, that those who love Pembroke best can wish it nothing better than that it may long proceed as it has thus begun.  As soon as he had taken his university degree young Browne entered on the study of medicine: and, in pursuit of that fast-rising science, he visited and studied in the most famous schools of France and Italy and Holland.  After various changes of residence, through all of which it is somewhat difficult to trace the young physician’s movements, we find him at last fairly settled in the city of Norwich, where he spent the remainder of his long, and busy, and prosperous, and honourable life.

Dr. Johnson laments that Sir Thomas Browne has left us no record of his travels and studies abroad, and all Sir Thomas’s readers will join with his great biographer in that regret.  At the same time, as we turn over the pile of letters that Sir Thomas sent to his student son Edward, and to his sailor son Thomas, when they were abroad at school and on ship, we can easily collect and picture to ourselves the life that the writer of those so wise and so beautiful letters led when he himself was still a student at Montpellier and Padua and Leyden.  ‘Honest Tom,—God bless thee, and protect thee, and mercifully lead thee through the ways of His providence.  Be diligent in going to church.  Be constant, and not negligent in your daily private prayers.  Be a good husband.  Cast up your accounts with all care.  Be temperate in diet, and be wary not to overheat yourself.  Be courteous and civil to all.  Live with an apothecary, and observe his drugs and practice.  Frequent civil company.  Point your letters, and put periods at the ends of your sentences.  Have the love and the fear of God ever before your eyes.  And may God confirm your faith in Christ.  Observe the manner of trade: how they make wine and vinegar, and keep a note of all that for me.  Be courteous and humble in all your conversation, and of good manners: which he that learneth not in France travaileth in vain.  When at sea read good books.  Without good books time cannot be well spent in those great ships.  Learn the stars also: the particular coasts: the depth of the road-steads: and the risings and fallings of the land.  Enquire further about the mineral water: and take notice of such plants as you meet with.  I am told that you are looked on in the Service as exceeding faithful, valiant, diligent, generous, vigilant, observing, very knowing, and a scholar.  When you first took to this manner of life, you cannot but remember that I caused you to read all the sea-fights of note in Plutarch: and, withal, gave you the description of fortitude left by Aristotle.  In places take notice of the government of them, and the eminent persons.  The merciful providence of God ever go with you, and direct and bless you, and give you ever a grateful heart toward Him.  I send you Lucretius: and with it Tully’s Offices: ’tis as remarkable for its little size as for the good matter contained in it, and the authentic and classical Latin.  I hope you do not forget to carry a Greek Testament always to church: a man learns two things together, and profiteth doubly, in the language and the subject.  God send us to number our days, and to fit ourselves for a better world.  Times look troublesome: but you have an honest and peaceable profession like myself, which may well employ you, and you have discretion to guide your words and actions.  May God be reconciled to us, and give us grace to forsake our sins which set fire to all things.  You shall never want my daily prayers, and also frequent letters.’  And so on, through a delightful sheaf of letters to his two sons: and out of which a fine picture rises before us, both of Sir Thomas’s own student life abroad, as well as of the footing on which the now famous physician and English author stood with his student and sailor sons....