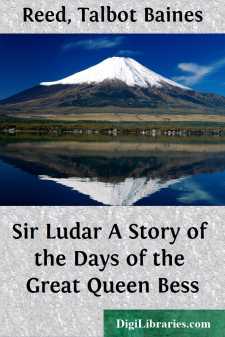 How I saw my Queen.

Every story, whether wise or foolish, grave or gay, must needs have a beginning. How it comes to pass that my story begins on a certain day in May, in the year of our Lord 1585, I can never, although I am far on in life now, properly explain.

For that was not the day on which I was born. That adventure had befallen me eighteen years before, at the parson’s little house in Felton Regis. Most people who write their histories have a pride in dragging their readers back to the moment when they first hallooed defiance to this wicked world; but I, since I have clean forgotten the event, must e’en confess that my story does not begin there. A like adventure chanced often at the parsonage, and, at nine years of age, I reigned king absolute over a nursery full of her Majesty’s subjects who called me brother, and quailed before my nod like Helots before the crest of a Spartan. But, as I say, all that is neither here nor there in my story.

Nor, in truth, is that grey September day, when, on the tail of a country hay-cart, I rode tremulously at my dear father’s side into London; where, with much pomp and taking of oaths, I was bound apprentice, body and soul, to Master Robert Walgrave, the printer, in the presence of the worshipful Master, Wardens, and Assistants of the Company of Stationers, who enriched themselves by 2 shillings 6 pence at my father’s cost, and looked upon me in a hungry way that made me tremble in my bones, and long to be out of their sight before they should order the bill of fare for their next feast. That was a day in my life truly, but it was ancient history when my story begins. I had grown a big lad since then, and was the king of Clubs without Temple Bar, and the terror of all young ’prentices for a mile round, who looked up with white cheeks when I swaggered by, and ran with their tails between their legs to hide behind counters and doorposts till I was out of sight.

No; nor yet does my story begin even at that sad day—alack!—when I stood by my widowed mother at the open grave of him who had been the pillar of our house and the pride of our lives. “Humphrey, my boy,” she had said as she placed her hand on my arm and led me, like one in a dream, from the place, “it is God who has taken—He will surely also give. Shall I count all lost, with a stalwart arm like this to lean upon?” Then she kissed me, and I, for very shame, dried my eyes and held up my head. Ah me! that was but a year before; the world had still moved on, the grass covered his grave, and still my story lacked a beginning.

How comes it, then, that this day in May, of all others, should stand up like a wall, as I look back over my life, and seem to me the beginning of all things? Perhaps this history may show—or, perhaps, he who reads it may come to see that I was right when I said I could not explain it.

It was a great day in London, within and without Temple Bar; and for me, if for no other reason, it was famous, because on that day, for the first and last time, I saw the great Queen Elizabeth....