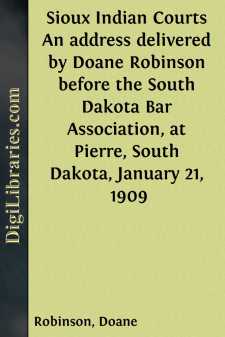 In their primitive life the Sioux Indians of North America had an intelligent system of jurisprudence, varying somewhat in the different bands, as our court practice varies in the several states, but nevertheless recognizing the same general principles throughout the confederacy.

It is not an easy thing to determine the laws or the practices of an unlettered people, who have abandoned the wild and primitive life to live under regulations prescribed by their conquerors, and who must depend upon tradition and recollection for the practices of the old life; but fortunately intelligent observers have from time to time, during the past two and one half centuries, noted their observations, and these, supplemented by the recollections of the older men now living, give to us a fairly clear understanding of the courts and the legal practices of these people.

Primarily the Sioux government was by clans,—patriarchal; but within the clan it very nearly approached the representative republican form. The council was the representative body which gave expression to the will of the people. True the council was selected by the chief of the clan, but his very tenure of office depended upon his using the nicest discretion in inviting into his cabinet the men of character, valor and influence, so that the body was almost invariably entirely representative of popular views and interests. Caste cut a considerable figure; indeed it has been said by those most intimate with Sioux life that there is as much caste among the Dakotas as among the Hindus. Only high caste men of course would be permitted to sit in the deliberations, but when a council was to be convened the ordinary practice was for the chief's crier to go out and announce to the camp that a matter was to be considered in council, and the head men at once assembled and seated themselves in the council circle as a matter of course and of right. The chief, unquestionably a man of courage and physical power, was an executive officer who rarely asserted arbitrary rule, particularly in civil affairs, for the Sioux were too high spirited a people to tolerate anything savoring of despotism. Usually he was suave, diplomatic and tolerant, and enjoyed the affection and veneration of his people. Most public affairs were determined in the general council, including many subjects naturally falling within the jurisdiction of courts of justice, but aside from the council were two distinct courts, one exercising jurisdiction in matters civil and criminal in times of peace; the other taking the broadest and most comprehensive jurisdiction of all things military, and in time of war assuming jurisdiction in all of the affairs of the people, arbitrarily placing the camp under martial law.

The judges of these courts were usually twelve in number and held their places by hereditary right, though occasionally some low caste man, through some brilliant exploit would break into this exclusive and aristocratic circle and sometimes even exercised dominating influence which the aristocrats dared not oppose, though he was still regarded as a plebian upstart, and was despised by the upper ten, and his rank died with him....