Sinking of the Titanic and Great Sea Disasters 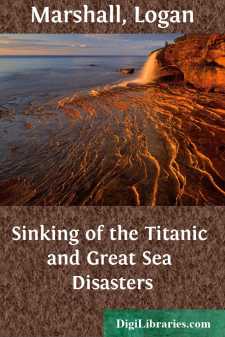 Dr. Van Dyke's Spiritual Consolation to the Survivors of the Titanic

The Titanic, greatest of ships, has gone to her ocean grave. What has she left behind her? Think clearly.

She has left debts. Vast sums of money have been lost. Some of them are covered by insurance which will be paid. The rest is gone. All wealth is insecure.

She has left lessons. The risk of running the northern course when it is menaced by icebergs is revealed. The cruelty of sending a ship to sea without enough life-boats and life-rafts to hold her company is exhibited and underlined in black.

She has left sorrows. Hundreds of human hearts and homes are in mourning for the loss of dear companions and friends. The universal sympathy which is written in every face and heard in every voice proves that man is more than the beasts that perish. It is an evidence of the divine in humanity. Why should we care? There is no reason in the world, unless there is something in us that is different from lime and carbon and phosphorus, something that makes us mortals able to suffer together—

"For we have all of us an human heart."

But there is more than this harvest of debts, and lessons, and sorrows, in the tragedy of the sinking of the Titanic. There is a great ideal. It is clearly outlined and set before the mind and heart of the modern world, to approve and follow, or to despise and reject.

It is, "Women and children first!"

Whatever happened on that dreadful April night among the arctic ice, certainly that was the order given by the brave and steadfast captain; certainly that was the law obeyed by the men on the doomed ship. But why? There is no statute or enactment of any nation to enforce such an order. There is no trace of such a rule to be found in the history of ancient civilizations. There is no authority for it among the heathen races to-day. On a Chinese ship, if we may believe the report of an official representative, the rule would have been "Men First, children next, and women last."

Where, then, does this rule which prevailed in the sinking Titanic come from? It comes from God, through the faith of Jesus of Nazareth.

It is the ideal of self-sacrifice. It is the rule that "the strong ought to bear the infirmities of those that are weak." It is the divine revelation which is summed up in the words: "Greater love hath no man than this, that a man lay down his life for his friends."

It needs a tragic catastrophe like the wreck of the Titanic to bring out the absolute contradiction between this ideal and all the counsels of materialism and selfish expediency.