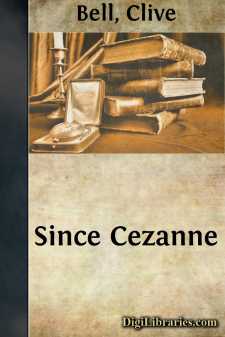 With anyone who concludes that this preliminary essay is merely to justify the rather appetizing title of my book I shall be at no pains to quarrel. If privately I think it does more, publicly I shall not avow it. Historically and critically, I admit, the thing is as slight as a sketch contained in five-and-thirty pages must be, and certainly it adds nothing to what I have said, in the essays to which it stands preface, on æsthetic theory. The function it is meant to perform—no very considerable one perhaps—is to justify not so much the title as the shape of my book, giving, in the process, a rough sketch of the period with certain aspects of which I am to deal. That the shape needs justification is attributable to the fact that though all, or nearly all, the component articles were written with a view to making one volume, I was conscious, while I wrote them, of dealing with two subjects. Sometimes I was discussing current ideas, and questions arising out of a theory of art; at others I was trying to give some account of the leading painters of the contemporary movement. Sometimes I was writing of Theory, sometimes of Practice. By means of this preface I hope to show why, at the moment, these two, far from being distinct, are inseparable.

To understand thoroughly the contemporary movement—that movement in every turn and twist of which the influence of Cézanne is traceable—the movement which may be said to have come into existence contemporaneously almost with the century, and still holds the field—it is necessary to know something of the æsthetic theories which agitated it. One of the many unpremeditated effects of Cézanne's life and work was to set artists thinking, and even arguing. His practice challenged so sharply all current notions of what painting should be that a new generation, taking him for master, found itself often, much to its dismay, obliged to ask and answer such questions as "What am I doing?" "Why am I doing it?" Now such questions lead inevitably to an immense query—"What is Art?" The painters began talking, and from words sprang deeds. Thus it comes about that in the sixteen or seventeen years which have elapsed since the influence of Cézanne became paramount theory has played a part which no critic or historian can overlook. It is because to-day that part appears to be dwindling, because the influence of theory is growing less, that the moment is perhaps not inopportune for a little book such as this is meant to be. It comes, if I am right, just when the movement is passing out of its first into the second phase.

During this first phase theory has been much to the fore. But it has been theory, you must remember, working on a generation of direct and intensely personal artists. In so curious an alliance you will expect to find as much stress as harmony; also, you must remember, its headquarters were at Paris where flourishes the strongest and most vital tradition of painting extant. In this great tradition some of the more personal artists, struggling against the intolerable exactions of doctrine, have found powerful support; indeed, only with its aid have they succeeded at last in securing their positions as masters who, though not disdaining to pay homage for what they hold from the new theories, are as independent as feudal princes....