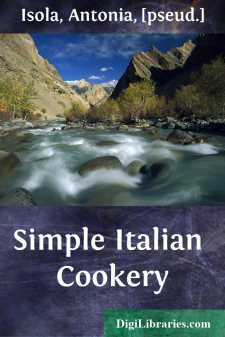 Boil the beef, bones, and vegetables in two quarts of water over a slow fire—adding pepper and salt. Skim occasionally, and after two hours add two tablespoons of sherry; then strain through fine soup-strainer or cheese-cloth. This is the basis of all the following soups, except when otherwise stated.

To make this stock richer, add a turkey leg to above receipt; boil one and a half hours, then add one-half a pound of finely chopped beef. Cook for half an hour longer, then strain.

To make meat jelly, add a little gelatine to the soup stock five minutes before straining.

To give a good dark color to the stock, add a few drops of "caramel," which is prepared in the following manner:

Put three tablespoons of granulated sugar into a saucepan with a little water, and until the sugar has become dark and reddish; then add a little more water and boil again until the sugar is melted. Strain and pour into a bottle when the caramel will keep perfectly for several weeks.

This is made like the meat stock, substituting a fowl in place of the beef and bones.

Beat the egg, yolk and white together; add salt and the cheese, grated, and the bread crumbs; mix well together and add to the boiling stock (strained). Stir well with a fork to prevent the egg from setting, and boil for four or five minutes.

Put into the stock the slices of pork, cut into small pieces; or, if desired, a ham bone may be substituted for the pork. Add the tomatoes, cut into small pieces also, the onions, in small pieces, and the rice. Boil all together until the rice is cooked. Then add the beans and the peas and cook a little longer. The soup is ready when it is thick. If desired, this chowder can be made with fish broth instead of the stock, and with the addition of shrimps which have been taken from their shells.

This dish can be served hot or cold.

1 liberal pound of fresh codfish, or any other lean fish for boiling  1 quart of water  1 onion  Parsley  Salt and pepper

Boil until fish is thoroughly cooked; strain and serve.

Take one-half pound of salt codfish that has been soaked, cut it up into squares, but not small....