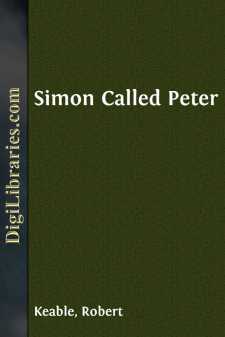 London lay as if washed with water-colour that Sunday morning, light blue sky and pale dancing sunlight wooing the begrimed stones of Westminster like a young girl with an old lover. The empty streets, clean-swept, were bathed in the light, and appeared to be transformed from the streets of week-day life. Yet the half of Londoners lay late abed, perhaps because six mornings a week of reality made them care little for one of magic.

Peter, nevertheless, saw little of this beauty. He walked swiftly as always, and he looked about him, but he noticed none of these things. True, a fluttering sheet of newspaper headlines impaled on the railings of St. Margaret's held him for a second, but that was because its message was the one that rang continually in his head, and had nothing at all to do with the beauty of things that he passed by.

He was a perfectly dressed young man, in a frock coat and silk hat of the London clergyman, and he was on his way to preach at St. John's at the morning service. Walking always helped him to prepare his sermons, and this sermon would ordinarily have struck him as one well worth preparing. The pulpit of St. John's marked a rung up in the ladder for him. That great fashionable church of mid-Victorian faith and manners held a congregation on Sunday mornings for which the Rector catered with care. It said a good deal for Peter that he had been invited to preach. He ought to have had his determined scheme plain before him, and a few sentences, carefully polished, at hand for the beginning and the end. He could trust himself in the middle, and was perfectly conscious of that. He frankly liked preaching, liked it not merely as an actor loves to sway his audience, but liked it because he always knew what to say, and was really keen that people should see his argument. And yet this morning, when he should have been prepared for the best he could do, he was not prepared at all.

Strictly, that is not quite true, for he had a text, and the text absolutely focused his thought. But it was too big for him. Like some at least in England that day, he was conscious of staring down a lane of tragedy that appalled him. Fragments and sentences came and went in his head. He groped for words, mentally, as he walked. Over and over again he repeated his text. It amazed him by its simplicity; it horrified him by its depth.

Hilda was waiting at the pillar-box as she had said she would be, and little as she could guess it, she irritated him. He did not want her just then. He could hardly tell why, except that, somehow, she ran counter to his thoughts altogether that morning. She seemed, even in her excellent brown costume that fitted her fine figure so well, out of place, and out of place for the first time.

They were not openly engaged, these two, but there was an understanding between them, and an understanding that her family was slowly recognising. Mr. Lessing, at first, would never have accepted an engagement, for he had other ideas for his daughter of the big house in Park Lane....