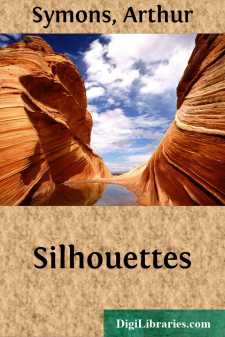 BEING A WORD ON BEHALF OF PATCHOULI.

AN ingenuous reviewer once described some verses of mine as "unwholesome," because, he said, they had "a faint smell of Patchouli about them." I am a little sorry he chose Patchouli, for that is not a particularly favourite scent with me. If he had only chosen Peau d'Espagne, which has a subtle meaning, or Lily of the Valley, with which I have associations! But Patchouli will serve. Let me ask, then, in republishing, with additions, a collection of little pieces, many of which have been objected to, at one time or another, as being somewhat deliberately frivolous, why art should not, if it please, concern itself with the artificially charming, which, I suppose, is what my critic means by Patchouli? All art, surely, is a form of artifice, and thus, to the truly devout mind, condemned already, if not as actively noxious, at all events as needless. That is a point of view which I quite understand, and its conclusion I hold to be absolutely logical. I have the utmost respect for the people who refuse to read a novel, to go to the theatre, or to learn dancing. That is to have convictions and to live up to them. I understand also the point of view from which a work of art is tolerated in so far as it is actually militant on behalf of a religious or a moral idea. But what I fail to understand are those delicate, invisible degrees by which a distinction is drawn between this form of art and that; the hesitations, and compromises, and timorous advances, and shocked retreats, of the Puritan conscience once emancipated, and yet afraid of liberty. However you may try to convince yourself to the contrary, a work of art can be judged only from two standpoints: the standpoint from which its art is measured entirely by its morality, and the standpoint from which its morality is measured entirely by its art.

Here, for once, in connection with these "Silhouettes," I have not, if my recollection serves me, been accused of actual immorality. I am but a fair way along the "primrose path," not yet within singeing distance of the "everlasting bonfire." In other words, I have not yet written "London Nights," which, it appears (I can scarcely realize it, in my innocent abstraction in aesthetical matters), has no very salutary reputation among the blameless moralists of the press. I need not, therefore, on this occasion, concern myself with more than the curious fallacy by which there is supposed to be something inherently wrong in artistic work which deals frankly and lightly with the very real charm of the lighter emotions and the more fleeting sensations.