Sidonia, the Sorceress : the Supposed Destroyer of the Whole Reigning Ducal House of Pomerania - Volume 1 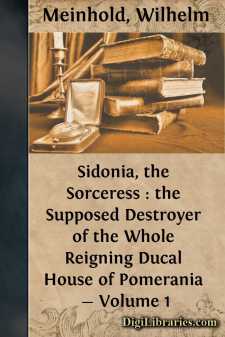 Amongst all the trials for witchcraft with which we are acquainted, few have attained so great a celebrity as that of the Lady Canoness of Pomerania, Sidonia von Bork. She was accused of having by her sorceries caused sterility in many families, particularly in that of the ancient reigning house of Pomerania, and also of having destroyed the noblest scions of that house by an early and premature death. Notwithstanding the intercessions and entreaties of the Prince of Brandenburg and Saxony, and of the resident Pomeranian nobility, she was publicly executed for these crimes on the 19th of August 1620, on the public scaffold, at Stettin; the only favour granted being, that she was allowed to be beheaded first and then burned.

This terrible example caused such a panic of horror, that contemporary authors scarcely dare to mention her name, and, even then, merely by giving the initials. This forbearance arose partly from respect towards the ancient family of the Von Borks, who then, as now, were amongst the most illustrious and wealthy in the land, and also from the fear of offending the reigning ducal family, as the Sorceress, in her youth, had stood in a very near and tender relation to the young Duke Ernest Louis von Pommern-Wolgast.

These reasons will be sufficiently comprehensible to all who are familiar with the disgust and aversion in which the paramours of the evil one were held in that age, so that even upon the rack these subjects were scarcely touched upon.

The first public, judicial, yet disconnected account of Sidonia's trial, we find in the Pomeranian Library of Dähnert, fourth volume, article 7, July number of the year 1755.

Dähnert here acknowledges, page 241, that the numbers from 302 to 1080, containing the depositions of the witnesses, were not forthcoming up to his time, but that a priest in Pansin, near Stargard, by name Justus Sagebaum, pretended to have them in his hands, and accordingly, in the fifth volume of the above-named journal (article 4, of April 1756), some very important extracts appear from them.

The records, however, again disappeared for nearly a century, until Barthold announced, some short time since, [Footnote: "History of Rugen and Pomerania," vol. iv. p. 486.] that he had at length discovered them in the Berlin Library; but he does not say which, for, according to Schwalenberg, who quotes Dähnert, there existed two or three different copies, namely, the Protocollum Jodoci Neumarks, the so-called Acta Lothmanni, and that of Adami Moesters, contradicting each other in the most important matters. Whether I have drawn the history of my Sidonia from one or other of the above-named sources, or from some entirely new, or, finally, from that alone which is longest known, I shall leave undecided.

Every one who has heard of the animadversions which "The Amber Witch" excited, many asserting that it was only dressed-up history, though I repeatedly assured them it was simple fiction, will pardon me if I do not here distinctly declare whether Sidonia be history or fiction.

The truth of the material, as well as of the formal contents, can be tested by any one by referring to the authorities I have named; and in connection with these, I must just remark, that in order to spare the reader any difficulties which might present themselves to eye and ear, in consequence of the old-fashioned mode of writing, I have modernised the orthography, and amended the grammar and structure of the phrases. And lastly, I trust that all just thinkers of every party will pardon me for having here and there introduced my supernatural views of Christianity. A man's principles, as put forward in his philosophical writings, are in general only read by his own party, and not by that of his adversaries....