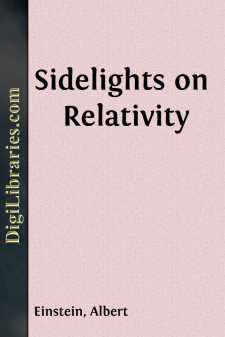 How does it come about that alongside of the idea of ponderable matter, which is derived by abstraction from everyday life, the physicists set the idea of the existence of another kind of matter, the ether? The explanation is probably to be sought in those phenomena which have given rise to the theory of action at a distance, and in the properties of light which have led to the undulatory theory. Let us devote a little while to the consideration of these two subjects.

Outside of physics we know nothing of action at a distance. When we try to connect cause and effect in the experiences which natural objects afford us, it seems at first as if there were no other mutual actions than those of immediate contact, e.g. the communication of motion by impact, push and pull, heating or inducing combustion by means of a flame, etc. It is true that even in everyday experience weight, which is in a sense action at a distance, plays a very important part. But since in daily experience the weight of bodies meets us as something constant, something not linked to any cause which is variable in time or place, we do not in everyday life speculate as to the cause of gravity, and therefore do not become conscious of its character as action at a distance. It was Newton's theory of gravitation that first assigned a cause for gravity by interpreting it as action at a distance, proceeding from masses. Newton's theory is probably the greatest stride ever made in the effort towards the causal nexus of natural phenomena. And yet this theory evoked a lively sense of discomfort among Newton's contemporaries, because it seemed to be in conflict with the principle springing from the rest of experience, that there can be reciprocal action only through contact, and not through immediate action at a distance. It is only with reluctance that man's desire for knowledge endures a dualism of this kind. How was unity to be preserved in his comprehension of the forces of nature? Either by trying to look upon contact forces as being themselves distant forces which admittedly are observable only at a very small distance—and this was the road which Newton's followers, who were entirely under the spell of his doctrine, mostly preferred to take; or by assuming that the Newtonian action at a distance is only apparently immediate action at a distance, but in truth is conveyed by a medium permeating space, whether by movements or by elastic deformation of this medium. Thus the endeavour toward a unified view of the nature of forces leads to the hypothesis of an ether. This hypothesis, to be sure, did not at first bring with it any advance in the theory of gravitation or in physics generally, so that it became customary to treat Newton's law of force as an axiom not further reducible. But the ether hypothesis was bound always to play some part in physical science, even if at first only a latent part.

When in the first half of the nineteenth century the far-reaching similarity was revealed which subsists between the properties of light and those of elastic waves in ponderable bodies, the ether hypothesis found fresh support. It appeared beyond question that light must be interpreted as a vibratory process in an elastic, inert medium filling up universal space. It also seemed to be a necessary consequence of the fact that light is capable of polarisation that this medium, the ether, must be of the nature of a solid body, because transverse waves are not possible in a fluid, but only in a solid....