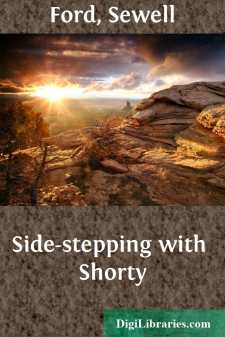 SHORTY AND THE PLUTE

Notice any gold dust on my back? No? Well it's a wonder there ain't, for I've been up against the money bags so close I expect you can find eagle prints all over me.

That's what it is to build up a rep. Looks like all the fat wads in New York was gettin' to know about Shorty McCabe, and how I'm a sure cure for everything that ails 'em. You see, I no sooner take hold of one down and outer, sweat the high livin' out of him, and fix him up like new with a private course of rough house exercises, than he passes the word along to another; and so it goes.

This last was the limit, though. One day I'm called to the 'phone by some mealy mouth that wants to know if this is the Physical Culture Studio.

"Mr. Dawes," says he, "will see the professah at fawh o'clock this awfternoon."

"Who is this?" says the gent at the other end of the wire, real sharp and sassy.

"Oh!" says he, simmerin' down a bit. "This is Professor McCabe himself, is it? Well, Mr. Fletcher Dawes requiahs youah services. You are to repawt at his apartments at fawh o'clock this awfternoon—fawh o'clock, understand?"

"Oh, yes," says I. "That's as plain as a dropped egg on a plate of hash. But say, Buddy; you tell Mr. Dawes that next time he wants me just to pull the string. If that don't work, he can whistle; and when he gets tired of whistlin', and I ain't there, he'll know I ain't comin'. Got them directions? Well, think hard, and maybe you'll figure it out later. Ta, ta, Mister Secretary." With that I hangs up the receiver and winks at Swifty Joe.

"Some pinhead up to Fletcher Dawes's," says I.

Funny, ain't it, how most everyone'll prick up their ears at that name? And it don't mean so much money as John D.'s or Morgan's does, either. But what them two and Harriman don't own is divided up among Fletcher Dawes and a few others. Maybe it's because Dawes is such a free spender that he's better advertised. Anyway, when you say Fletcher Dawes you think of a red-faced gent with a fistful of thousand-dollar bills offerin' to buy the White House for a stable.

But say, he might have twice as much, and I wouldn't hop any quicker. I'm only livin' once, and it may be long or short, but while it lasts I don't intend to do the lackey act for anyone.

Course, I thinks the jolt I gave that secretary chap closes the incident. But around three o'clock that same day, though, I looks down from the front window and sees a heavy party in a fur lined overcoat bein' helped out of a shiny benzine wagon by a pie faced valet, and before I'd done guessin' where they was headed for they shows up in the office door....