Shorty McCabe on the Job 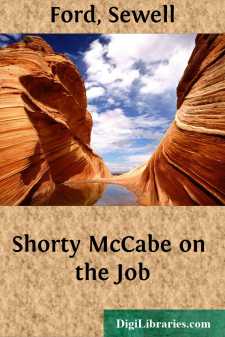 CHAPTER I WISHING A NEW ONE ON SHORTY

Do things just happen, like peculiar changes in the weather, or is there a general scheme on file somewhere? Is it a free-for-all we're mixed up in—with our Harry Thaws and our Helen Kellers; our white slavers, our white hopes, and our white plague campaigns; our trunk murders, and our fire heroes? Or are we runnin' on schedule and headed somewhere?

I ain't givin' you the answer. I'm just slippin' you the proposition, with the side remark that now and then, when the jumble seems worse than ever, you can get a glimpse of what might be a clew, or might not.

Anyway, here I was, busy as a little bee, blockin' right hooks and body jabs that was bein' shot at me by a husky young uptown minister who's a headliner at his job, I understand, but who's developin' a good, useful punch on the side. I was just landin' a cross wallop to the ribs, by way of keepin' him from bein' too ambitious with his left, when out of the tail of my eye I notices Swifty Joe edgin' in with a card in his paw.

"Time out!" says I, steppin' back and droppin' my guard. "Well, Swifty, what's the scandal?"

"But he—he's——" begins Swifty, strugglin' to connect that mighty intellect of his with his tongue.

"Eh?" says I, gawpin'. "Lemme see. Him! Say, Swifty, you go back and tell J. Bayard that if he's got nerve enough to want to see me, it'll be a case of wait. And if he's at all messy about it, I give you leave to roll him downstairs. The front of some folks! Come on now, Dominie! Cover up better with that right mitt: I'm goin' to push in a few on you this time."

And if you never saw a Fifth avenue preacher well lathered up you should have had a glimpse of this one at the end of the next round. He's game, though; even thanks me for it puffy.

"You're welcome," says I. "Maybe I did steam 'em in a bit; but I expect it was because I had my mind on that party out front. While you're rubbin' down I'll step in and attend to his case. If I could only wish a pair of eight-ounce gloves on him for a few minutes!"

So, without stoppin' to change, or even sheddin' the mitts, I walks into the front office, to discover this elegant party in the stream-line cutaway pacin' restless up and down the room. Yes, he sure is some imposin' to look at, with his pearl gray spats, and the red necktie blazin' brilliant under the close-clipped crop of Grand Duke whiskers. I don't know what there is special about a set of frosted face shubb'ry that sort of suggests bank presidents and so on, but somehow they do. Them and the long, thin nose gives him a pluty, distinguished look, in spite of the shifty eyes and the weak mouth lines. But I ain't in a mood to be impressed....