Shepp's Photographs of the World

by Daniel B. Shepp 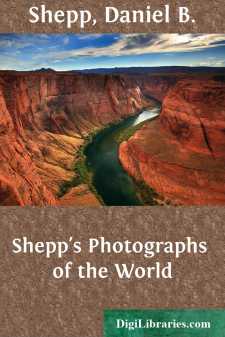 n all ages, men have been eager to tell and to hear new things; and before books were printed, travellers wandered abroad, bringing home wonderful stories of unknown lands.

In the construction of this publication, the object is not to tell stories or relate experiences, but to exhibit, by carefully taken photographs, the great sights of the world as they exist to-day.

The art of teaching with pictures is very old. The ancient Egyptians used emblems and designs to record the various incidents of their history, traces of which are still found on obelisks and ruined temples.

Wood illustrations were also introduced many years ago; and as time rolled on, marked improvements were made in the art of wood-engraving. Notwithstanding the fact that they have not the power of truly representing the original objects they intend to portray, they are still largely used for illustrating printed books and papers.

Over a century ago, the art of photography was made known to the world by Scheele, a Swedish chemist; since then, many improvements have been made in this art, until now, by the photo-electro process, an exact photograph can be transferred on a copper plate, without losing a single line or shade, and from this plate, photographs can be printed, such as appear in this book.

Owing to the increasing popularity of the graphic and pictorial methods of imparting information, the photographic camera was employed to secure photographs of the greatest things of the world as seen to-day, both for instruction and entertainment.

We forget knowledge acquired by common conversation, and descriptions of places and things; but when we observe them, and their forms are conveyed to our minds through the medium of our eyes, they are indelibly impressed upon the memory.

Page 4 The object, then, of this Publication is to present photographs of all the great sights of the world, from every corner of the globe, carefully reproducing them by the photo-electro process, and adding a few lines of explanation to every picture, so that any one can comprehend each subject.

To make this collection, every country was carefully ransacked, starting in Ireland, with the famous Blarney Castle and Lakes of Killarney in the south, and extending to the Giant's Causeway in the north, said by an old legend to have been built by giants to form a road across the channel to Scotland.

Passing through Scotland, we photographed its hills, castles, lochs, bridges and cities. Throughout Wales and England, we represent their busy seaport and manufacturing towns; the home of Shakespeare, the Bard of Avon; Windsor Castle, far-famed for its beauty and battlements; Greenwich Observatory, from which the longitude of the world is computed; Hampton Court, a relic of royalty; and London, the metropolis of the world, with over six million people, its crowded streets, imperial buildings, historic abbeys, famous towers and monuments.

The Netherlands and Denmark are represented by the dykes and windmills, Copenhagen, Amsterdam, Rotterdam, Antwerp, Brussels, the battlefield of Waterloo; Russia, the land of the Czar, by Moscow, The Kremlin; St....