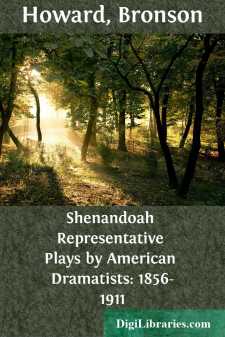 The present Editor has just read through some of the vivacious correspondence of Bronson Howard—a sheaf of letters sent by him to Brander Matthews during a long intercourse. The time thus spent brings sharply to mind the salient qualities of the man—his nobility of character, his soundness of mind, his graciousness of manner, and his thorough understanding of the dramatic tools of his day and generation. To know Bronson Howard was to be treated to just that human quality which he put into even his hastily penned notes—and, as in conversation with him, so in his letters there are repeated flashes of sage comment and of good native wit. Not too often can we make the plea for the gathering and preserving of such material. Autobiography, after all, is what biography ought to be—it is the live portrait by the side of which a mere appreciative sketch fades. I have looked through the "Memorial" volume to Bronson Howard, issued by the American Dramatists Club (1910), and read the well-tempered estimates, the random reminiscences. But these do not recall the Bronson Howard known to me, as to so many others—who gleams so charmingly in this correspondence. Bronson Howard's plays may not last—"Fantine," "Saratoga," "Diamonds," "Moorcraft," "Lillian's Last Love"—these are mere names in theatre history, and they are very out of date on the printed page. "The Banker's Daughter," "Old Love Letters" and "Hurricanes" would scarcely revive, so changed our comedy treatment, so differently psychologized our emotion. Not many years ago the managerial expedient was resorted to of re-vamping "The Henrietta"—but its spirit would not behave in new-fangled style, and the magic of Robson and Crane was broken. In the American drama's groping for "society" comedy, one might put "Saratoga," and even "Aristocracy," in advance of Mrs. Mowatt's "Fashion" and Mrs. Bateman's "Self;" in the evolution of domestic problems, "Young Mrs. Winthrop" is interesting as an early breaker of American soil. But one can hardly say that, either for the theatre or for the library, Bronson Howard is a permanent factor. Yet his influence on the theatre is permanent; his moral force is something that should be perpetuated. Whatever he said on subjects pertaining to his craft—his comments on play-making most especially,—was illuminating and judicious. I have been privileged to read the comments sent by him to Professor Matthews during the period of their collaboration together over "Peter Stuyvesant;" they are practical suggestions, revealing the peculiar way in which a dramatist's mind shapes material for a three hours' traffic of the stage—the willingness to sacrifice situation, expression—any detail, in fact, that clogs the action. Through the years of their acquaintance, Howard and Matthews were continually wrangling good-naturedly about the relation of drama to literature. Apropos of an article by Matthews in The Forum, Howard once wrote:

I note that you regard the 'divorce' of the drama from literature as unfortunate....