Shelled by an Unseen Foe 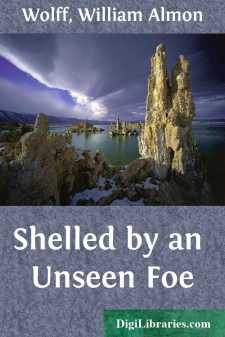 THE CALL OF HOME

Reveille was over at the military school, and the three boys on the end of the line nearest the mess hall walked slowly toward the broad steps of the big brick building ahead. They differed greatly in type, but of this they were unconscious, for all were deep in thought.

"I am going home," said the tallest boy abruptly. "Had a letter from my sister last night. My word, they are having some ripping times over there!"

"Your father won't let you," said the second lad. "How can you go to England when I can't get back to Mexico?"

"I can jolly well go," said the tall boy. "I've been planning for this. Mid-term is over, and I haven't told you chaps, but I've been hoarding every cent of my allowance all winter. I have enough and to spare for second cabin."

"But your father wants you here out of harm's way," urged the Mexican.

"He thinks he does," said Nickell-Wheelerson smiling, his blue eyes flashing. "He thinks he does, but I know he is just trying me out. Here's the way it is. Dad's in the field and my second brother; you know my oldest brother was shot in the trenches in France two months ago. I'm nineteen. There are two little chaps to carry on the name and take care of the title, if the rest of us go. I've just got to get over there! Don't you see how it is?"

"Of course!" said the Mexican, his dark eyes glowing gloomily. "Of course you feel you've got to go! And here I must stay. I want to go home too."

"It's different with you," said Nickell-Wheelerson, patting his companion on the back. "You keep out of that mess! Mexico is going to need you worse later on."

"How about you?" demanded Morales, the Mexican. "I should think England would need you when that mess, as you call it, is finished."

"She needs me now, and I know it, and dad knows it," Nick assured him. "I'm going home! You'd better be glad you are not mixed up in this thing," he said, turning to the third boy. "You are safe awhile yet, you old Greece-spot, you!"

"There are some Greeks fighting; a few on the European border of the Dardanelles," said the boy addressed.

"Oh, of course you will get into it sooner or later," said Nick, "but I'm banking on that queen of yours to stall things along as far as she can. She can't put it off forever, though. You will be in it."

"As sure as my name is Zaidos," said the young Greek, "you are quite right! We will have to fight sooner or later."

Light-heartedly they raced up the steep hill leading from the parade ground to the mess hall.

A slim young orderly came out of the Adjutant's office onto the terrace and looked about. Seeing the three boys, he called in a high, clear voice, "Oh, you Nosey!" and as the Greek approached added formally, "Corporal Zaidos is wanted by the Adjutant."

"What's he going to get ragged for now, I wonder," mused Nickell-Wheelerson as he and Morales joined the crowd and went into the mess hall.

Zaidos did not come back. Nick watched the door anxiously....