She Would Be a Soldier The Plains of Chippewa 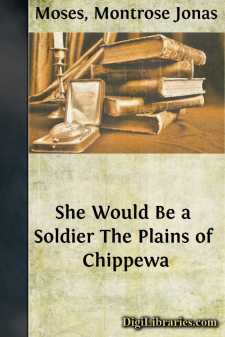 Mr. Noah was born in Philadelphia, July 19, 1785, the son of Portuguese Jewish descent, it being stated by some sources that his father not only fought in the Revolutionary Army, but was a sufficient friend of George Washington to have the latter attend his wedding. In his early years, he was apprenticed, according to the custom of the day, to a carver and gilder, but he spent most of his evenings in the Franklin Library and at the theatre, likewise attending school in his spare time, where, among the pupils, he met John and Steven Decatur, famed afterwards in the history of the American Navy. He filled a minor position in the Auditor's office in Philadelphia, but his tastes inclined more to journalistic than they did to desk work, and, in 1800, he travelled to Harrisburg as a political reporter.

Several years after this, he went to Charleston, and studied law, but before he had had a chance to practise, he became the editor of the Charleston City Gazette, and, advocating those principles which resulted in the War of 1812, he used his pen, under the pseudonym of Muley Molack, to disseminate those ideas in editorials. The consequence is he encouraged much hatred, and was forced into many duels to support his opinions. In 1811, he was offered the position of Consul at Riga by President Madison, but declined. In 1813, he was sent by Mr. Monroe, as Consul, to Tunis, at a time when the United States was having trouble with Algerian piracy.

During all this period, his pen was actively busy, and while he was abroad he did much travelling which resulted, in 1819, in his publishing a book of travels.

In 1816, he returned to New York, and settled there as a journalist. Being a Tammanyite in politics, we find him filling the position of Sheriff, Judge and Surveyor of the Port at various periods. He was, likewise, an editor of some skill, and his name is associated with the columns of the New York Enquirer, the Evening Star, the Commercial Advertiser, the Union, and the Times and Messenger.

His political career may be measured in the following manner:

In 1821 he became Sheriff. In 1823, he was admitted to the bar of New York, and in 1829 to the bar of the Supreme Court of the United States. This same year he was appointed Surveyor of the Port of New York.

Entering very prominently in politics, he opposed the election of Van Buren, and gave his vote to General Harrison. Governor Seward appointed him, in 1841, Judge of the Court of Sessions. The same year he was made a Supreme Court Commissioner.

It was in 1825 that, as one of the early Zionists of America, he entered into negotiations for the purchase of nearly three thousand acres of land on Grand Island, in New York State, where it was his dream to establish the City of Ararat, a haven of Judaism in this country. This venture became the basis for a story by Israel Zangwill, called "Noah's Ark." He died in New York on March 22, 1851, having lived in that city since 1813.

Any full Bibliography will give a sufficient idea of the scope of Major Noah's pen. He lived at a time when American Letters were beginning to develop, himself a friend of most of the literary figures of the day—Cooper, Irving, Fitz-Green Halleck and others. And we have an excellent impression of the manner in which the younger literary men regarded the authority of Noah in the "Reminiscences" of J. T. Trowbridge:

"Come with me," he [Mr. Noah] said, putting on his hat; and we went out together, I with my roll of manuscript, he with his stout cane. Even if I had been unaware of the fact, I should very soon have discovered that I was in company with an important personage. Everybody observed him, and it seemed as if every third or fourth man we met gave him a respectful salute. He continued his friendly talk with me in a way that relieved me of all sense of my own insignificance in the shadow of his celebrity and august proportions.

As far as his theatrical association is concerned, we can have no better source of information than a letter written by Noah to William Dunlap, and published in the latter's "History of the American Theatre." It is quoted in full:

I am happy to hear that your work on the American Drama is in press, and trust that you may realize from it that harvest of fame and money to which your untiring industry and diversified labours give you an eminent claim. You desire me to furnish you a list of my dramatic productions; it will, my dear sir, constitute a sorry link in the chain of American writers—my plays have all been ad captandum: a kind of amateur performance, with no claim to the character of a settled, regular, or domiciliated writer for the green-room—a sort of volunteer supernumerary—a dramatic writer by "particular desire, and for this night only," as they say in the bills of the play; my "line," as you well know, has been in the more rugged paths of politics, a line in which there is more fact than poetry, more feeling than fiction; in which, to be sure, there are "exits and entrances"—where the "prompter's whistle" is constantly heard in the voice of the people; but which, in our popular government, almost disqualifies us for the more soft and agreeable translation to the lofty conceptions of tragedy, the pure diction of genteel comedy, or the wit, gaiety, and humour of broad farce....