She and I, Volume 2 A Love Story. A Life History. 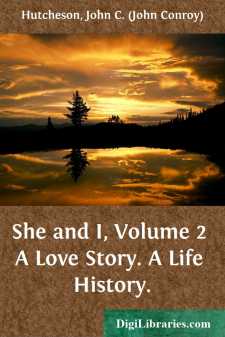 True, I talk of dreams;Which are the children of an idle brain,Begot of nothing but vain fantasy,Which is as thin of substance as the air;And more inconstant than the wind, who woosEven now the frozen bosom of the north,And, being anger’d, puffs away from thence,Turning his face to the dew-dropping south.

I had a most curious dream about Min that very night.

Probably this was owing to the reactionary mental relief I experienced after all my doubts and jealousies—you know, “joie fait peur” sometimes. It might also have resulted from the stronger impression which my last interview with her had made upon my mind, coupled with all the sweet hopes and darling imaginings that had sprung suddenly into existence, when her rose-red lips told me in liquid accents that she loved me. How deliciously the words had sounded! I seemed to hear them now once more; and, that kiss of ecstasy—I almost felt it again in all its passionate intensity!

But, the physiology of dreams, and their origin and connection with our day life, are subjects that have never been clearly explained, frequently investigated though they have been by intellects that have groped to the bottom of almost every phenomenal possibility in the finite world. We have not yet succeeded in piercing through the thick veil that hides from our gaze the unseen, ideal, and spiritual cosmos that surrounds, with its ghostly atmosphere, the more material universe in which we move and breathe and have our being. We are oblivious, in most cases, of that thought-peopled, encircling essence; although, it influences our motives and actions, perhaps, in a greater degree than we may be willing to allow.

I shall not attempt to solve the workings of the varied phantasmagoria that flitted across the horizon of my brain that night, curious as they were; nor, will I try to track out how, and in what way, they retraced the events of the past, and prognosticated the possibilities of the future. The task in either direction would be as hopeless as it is uninteresting; consequently, I will abandon it to the attention of more inquiring psychological minds than my own, hurrying on to tell what it was that I dreamt.

My vision was a threefold one—a series of dreams within dreams.

First, I thought that I was on a wide, whitened Alpine plain. It was night. In front of me, towered on high the rugged peaks of the Matterhorn, imposing in their grandeur; further on, in the illimitable distance, I could descry the rounded, snowcapp’d head of Mont Blanc, rearing itself heavenward, where the pale, treacherous moon kept her silent watch, and from whence the glistening stars twinkled down through an ocean of space, touching frosted particles of matter with scintillations of light, and making them glitter like diamonds—world-old, transparent jewels, set in the cold, ice-blue crown of the eternal glacier....