She and I, Volume 1 A Love Story. A Life History. 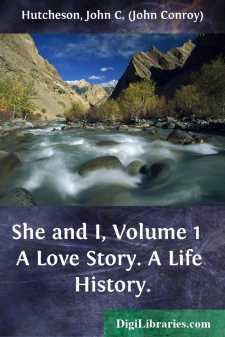 “I muse, as in a trance, when e’er    The languors of thy love-deep eyesFloat on me. I would I were    So tranced, so wrapt in ecstasies,To stand apart, and to adore,    Gazing on thee for evermore!”

I saw her first in church.

Do you happen to know a quaint, dreamy old region in the west of London, which bricks and mortar have not, as yet, overtaken, nor newfangled villas vulgarised?

A region of innumerable market gardens that are principally laid out in long, narrow beds, lost into nothingness as they dwindle down in the dim vista of perspective, and which are planted with curly endive, piquante-looking lettuces, and early cabbages; squat rows of gooseberry bushes and currant trees, with a rose set here and there in between; and sweet-smelling, besides, of hidden violets and honeysuckles, and the pink and white hawthorn of the hedges in May:—

A region of country lanes, ever winding and seemingly never ending, leading down to and past and from the whilom silent, whilom bustling river, that never heeds their tortuous intricacies, but hurries by on its way through the busy city towards the sea below; lanes wherein are to be occasionally met with curious old stone houses, of almost historical antecedents and dreamy as the region in which they lie, scattered about in the queerest situations without plan or precedent, on which the casual pedestrian comes when he least expects:—

Do you know this quaint old region, this fleeting oasis in the Sahara of the building-mad suburban metropolis? I do, well; its market gardens, its circumambient lanes, its old, antiquarian stone houses, and all!

Many a time have I wandered through them; many a time watched the heavy waggons as they went creaking on their way to town and the great emporium at Covent Garden, groaning beneath the wealth and weight of the vegetable produce they carried, and laden so high with cunningly-arranged nests of baskets on baskets, that one believed each moment that they would topple over, and held the breath for fear of hastening their fall; many a time sought to trace each curving lane to its probable goal, or tried to hunt out the hidden histories which lay concealed within the crumbling walls of the old dwellings on which I might happen to light in my walks.

But my favourite ramble, eclipsing all others now in pleasant recollections of by-gone days, was through the Prebend’s Walk, bordered with its noble grove of stately lime trees and oaks and elms on either hand; and passing by open fields, that are, in spring, rich with yellow buttercups and star-spangled daisies, and, in summer, ripe with the aromatic odours of new-mown hay.

The Prebend’s Walk, beyond where the lime-grove ends, whence the prebend’s residence can be faintly distinguished through the clustering masses of tree-foliage, merges into the open, commanding the river in front; but it is still marked out by a stray elm or horse-chestnut, placed at scanty intervals, to keep up the idea of the ancient avenue beyond....