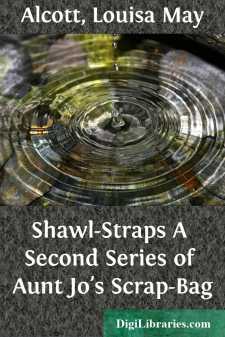 'On the first day of February we three will sail from Boston for Messina, in the little fruit-ship "Wasp." We shall probably be a month going, unless we cross in a gale as I did, splitting sails every night, and standing on our heads most of the way,' said Amanda, folding up her maps with an air of calm decision.

'Hurrah! what fun!' cried Matilda, waving a half-finished dressing-case over her head.

But Lavinia, with one sepulchral groan, fell flat upon her bed, and lay there, dumb with the horrors of such a voyage.

'Just the thing for you, my poor old dear. Think of the balmy airs of Sicily, the oranges, the flowers. Then a delicious month or two at Sorrento, with no east winds, no slush, no spring cleaning. We shall be as merry as grigs, and get as buxom as dairy-maids in a month,' said the sprightly Amanda.

'You promised to go, and if you back out we are lost, for we must have a duenna. You can lie round in Europe just as well as here, and I have no doubt it will do you a world of good,' added Matilda.

'I shall keep my word; but you will bury me in the Atlantic, so make up your minds to it. Do you suppose that I, a poor, used-up old invalid, who can't look at a sail-boat without a qualm, can survive thirty days of standing on my head, and thirty nights of sail-splitting, as we go slamming and lurching across two or three awful oceans?' demanded Lavinia, with the energy of despair.

Before anyone could reply, Amanda's little Mercury appeared with a note.

'The "Wasp" will not take passengers, and no other fruit-ship sails this spring,' read Amanda.

'Be calm: we shall go, sooner or later, if I buy a ship and sail her myself;' with which indomitable remark Amanda went forth to grapple with and conquer untoward circumstances.

A month of plans, vicissitudes, and suspense followed, during which Amanda strove manfully; Matilda suffered agonies of hope and fear; and Lavinia remained a passive shuttlecock, waiting to be tossed wherever Fate's battledore chose to send her.

'Exactly two weeks from to-day, we sail with a party of friends in the French steamer "Lafayette," from New York for Brest. Will you be ready?' demanded Amanda, after a protracted wrestle with aforesaid adverse circumstances.

'But that is exactly what we didn't mean to do. It's expensive and fashionable; France and not Italy, north and not south.'

'That's because I'm in the party. If you take a Jonah nothing will go well. Leave me behind, and you will have a charming trip,' said Lavinia, who had an oyster-like objection to being torn from her bed.

'No matter, we are going, live or die, sink or swim; and I shall expect to meet you, all booted and spurred and fit for the fight, April first,' said the unwavering Amanda.

'A most appropriate day for three lone women to start off on a wild-goose chase after health and pleasure,' groaned Lavinia from among her pillows.

'Very well, then; I leave you now, and shall expect to meet on the appointed day?'