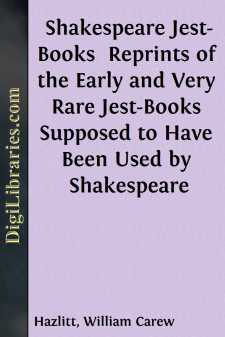 When a small impression of these quaint old books issued from the Chiswick Press, many years ago, under the auspices of the late Mr. S. W. Singer, that gentleman merely designed the copies struck off for presentation to a select circle of literary friends who, like himself, felt a warm interest in every relic of the past which helped to illustrate Shakespeare and ancient English manners. He did not consequently feel under the necessity of furnishing notes, and he preserved not only the old orthography, but the old punctuation, and the most palpable errors of the press. His edition unfortunately laboured under one disadvantage: when he printed, in 1814, the Mery Tales and Quick Answers from Berthelet's edition, he imagined that this was the book to which Beatrice is made to allude in Much Ado About Nothing, and under this idea he christened the volume Shakespeare's Jest Book. He also thought he was safe in assuming that the edition by Berthelet was the only one extant. But Mr. Singer discovered, before his undertaking was a year old, that he had come to an erroneous conclusion on both these points: for an impression of the Mery Tales, &c. printed by Henry Wykes in 1567, and containing, with all the old matter, twenty-six additional stories, was brought under his notice, and about the same time a totally unknown work, bearing the very title mentioned by Beatrice, was accidentally rescued from oblivion by the Rev. J. J. Conybeare, who, it is said by Dunlop, picked up the treasure at a bookstall. This was no other than A C. Mery Talys.

The copy of C. Mery Talys thus casually brought to light, had been used by a binder of or about the time of its appearance as pasteboard to another book, and it was in this state when it fell in the way of Mr. Conybeare. As might have been expected, many of the leaves were damaged and mutilated; but (which rendered the matter still more curious) it happily chanced that more than one copy had been employed by the aforesaid binder in fashioning the aforesaid pasteboard, and the consequence was that a much larger fragment than would have been otherwise saved was formed by means of duplicate leaves. Still several gaps in the text remained, which it was found impossible to fill up, and as no other copy has since occurred, no better means exist now than existed fifty years ago of supplying the deficiencies. Where the hiatus consisted of a word or two only, and the missing portion could be furnished by conjecture, Mr. Singer took the liberty of adding what seemed to be wanting, in italics; his interpolations have been left as they stood. The old orthography and language, besides the charm of quaintness, appeared to the editor to possess a certain philological value, and he has rigidly adhered to it. In respect to the punctuation, the case was different; there were no reasons of any kind for its retention; it was very imperfect and capricious; and it has therefore been modernized throughout.

The C. Mery Talys, of which the copy above described has a fair pretention to the distinction of uniqueness, were first printed by John Rastell, without date but circa 1525, in folio, 24 leaves. Whether Rastell printed more than one edition is an open question. The book was not reprinted, so far as we know at present, till 1558, when John Walley or Waley paid two shillings to the Stationers' Company for his licence to produce this and other pieces. Walley reprinted a great number of books which had originally come from the press of Wynkyn de Worde and other early masters of the art, but it is not very likely that the C. Mery Talys made their appearance prior to 1525, and there is room to doubt whether even then the severe reflections on the scandalous lives of the Roman Catholic priesthood were not slightly premature. The almost total destruction of copies may be, after all, due, not to the excessive popularity of the publication, but to its early suppression by authority or otherwise....