Shakespeare: His Life, Art, And Characters, Volume I. With An Historical Sketch Of The Origin And Growth Of The Drama In England 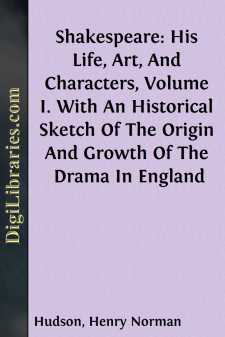 Shakespeare, by general suffrage, is the greatest name in literature. There can be no extravagance in saying, that to all who speak the English language his genius has made the world better worth living in, and life a nobler and diviner thing. And even among those who do not "speak the tongue that Shakespeare spake," large numbers are studying the English language mainly for the purpose of being at home with him. How he came to be what he was, and to do what he did, are questions that can never cease to be interesting, wherever his works are known, and men's powers of thought in any fair measure developed. But Providence has left a veil, or rather a cloud, about his history, so that these questions are not likely to be satisfactorily answered.

The first formal attempt at an account of Shakespeare's life was made by Nicholas Rowe, and the result thereof published in 1709, ninety-three years after the Poet's death. Rowe's account was avowedly made up, for the most part, from traditionary materials collected by Betterton the actor, who made a visit to Stratford expressly for that purpose. Betterton was born in 1635, nineteen years after the death of Shakespeare; became an actor before 1660, retired from the stage about 1700, and died in 1710. At what time he visited Stratford is not known. It is to be regretted that Rowe did not give Betterton's authorities for the particulars gathered by him. It is certain, however, that very good sources of information were accessible in his time: Judith Quiney, the Poet's second daughter, lived till 1662; Lady Barnard, his granddaughter, till 1670; and Sir William Davenant, who in his youth had known Shakespeare, was manager of the theatre in which Betterton acted.

After Rowe's account, scarce any thing was added till the time of Malone, who by a learned and most industrious searching of public and private records brought to light a considerable number of facts, some of them very important, touching the Poet and his family. And in our own day Mr. Collier has followed up the inquiry with very great diligence, and with no inconsiderable success; though, unfortunately, much of the matter supplied by him has been discredited as unauthentic, by those from whom there is in such cases no appeal. Lastly, Mr. Halliwell has given his intelligent and indefatigable labours to the same task, and made some valuable additions to our stock.

The lineage of WILLIAM SHAKESPEARE, on the paternal side, has not been traced further back than his grandfather. The name, which in its composition smacks of brave old knighthood and chivalry, was frequent in Warwickshire from an early period.

The father of our Poet was JOHN SHAKESPEARE, who is found living at Stratford-on-Avon in 1552. He was most likely a native of Snitterfield, a village three miles from Stratford; as we find a Richard Shakespeare living there in 1550, and occupying a house and land owned by Robert Arden, the maternal grandfather of our Poet. This appears from a deed executed July 17, 1550, in which Robert Arden conveyed certain lands and tenements in Snitterfield, described as being "now in the tenure of one Richard Shakespeare," to be held in trust for three daughters "after the death of Robert and Agnes Arden."

An entry in a Court Roll, dated April, 1552, ascertains that John Shakespeare was living in Stratford at that time....