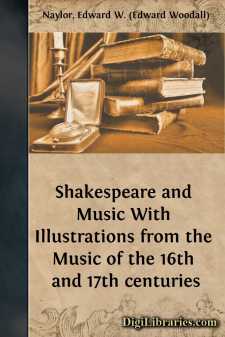 [I am indebted for the arrangement of this picture to the kindness of the authorities at South Kensington Museum, where all these instruments may be found, except the Pipe and Cornet, which belong to my friend, Mr W.F.H. Blandford.]

In the middle, on table.

Queen Elizabeth's 'Virginal.' Date, latter half of 16th century. Outside of case (not visible in picture) covered with red velvet. Inside finely decorated. Has three locks. Is more properly a Spinet, the case not being square, but of the usual Spinet shape—viz., one long side (front view), and four shorter ones forming a rough semi-circle at back.

Top row, counting from the right.

1. Tabor-pipe. Modern, but similar to the Elizabethan instrument. French name, 'galoubet.' Merely a whistle, cylindrical bore, and 3 holes, two in front, one (for thumb) behind. The scale is produced on the basis of the 1st harmonic—thus 3 holes are sufficient. It was played with left hand only, the tabor being hung to the left wrist, and beaten with a stick in the right hand. Length over all of pipe in picture, 1 ft. 2-1/2 in.; speaking length, 1 ft. 1-1/8 in.; lowest note in use, B flat above treble staff. Mersennus (1648), however, says the tabor-pipe was in G, which makes it larger than the one in the picture. A contemporary woodcut (in Calmour's 'Fact and Fiction about Shakespeare') of William Kemp, one of Shakespeare's fellow-actors, dancing the Morris, to tabor and pipe, makes the pipe as long as from mouth to waist—viz., about 18 inches, which agrees with Mersennus. A similar woodcut in 'Orchésographie' makes the pipe even longer. Both represent pipe as conical, like oboe. The length of the tabor, in these two woodcuts, seems to be about 1 ft. 9 in., and the breadth, across the head, 9 or 10 in. No snare in the English woodcut, but the French one has a snare.

3. Recorder. Large beak-flute of dark wood. Three joints, not including beak. The beak has a hole at the back, covered with a thin skin, which vibrates and gives a slight reediness to the tone. The usual 6 finger holes in front, a thumb hole behind, and a right-or-left little-finger hole in lowest joint.

4. Small French Treble Viol, 17th century. Back view, same shape as of all other viols of whatever size. 6 strings, 4 frets.

3. Arch Lute. Italian, 17th century. 18 strings, 8 on lower neck, 10 on higher, off the fingerboard. The latter are 'basses,' and probably half of them duplicates. 7 frets on neck, 5 more on belly.

A principal character of the works of a very great author is, that in them each man can find that for which he seeks, and in a form which includes his own view.

With Shakespeare, as one of the greatest of the great, this is pre-eminently the case. One reader looks for simply dramatic interest, another for natural philosophy, and a third for morals, and each is more than satisfied with the treatment of his own special subject.

It is scarcely a matter of surprise, therefore, that the musical student should look in Shakespeare for music, and find it treated of from several points of view, completely and accurately.

This is the more satisfactory, as no subject in literature has been treated with greater scorn for accuracy, or general lack of real interest, than this of music....